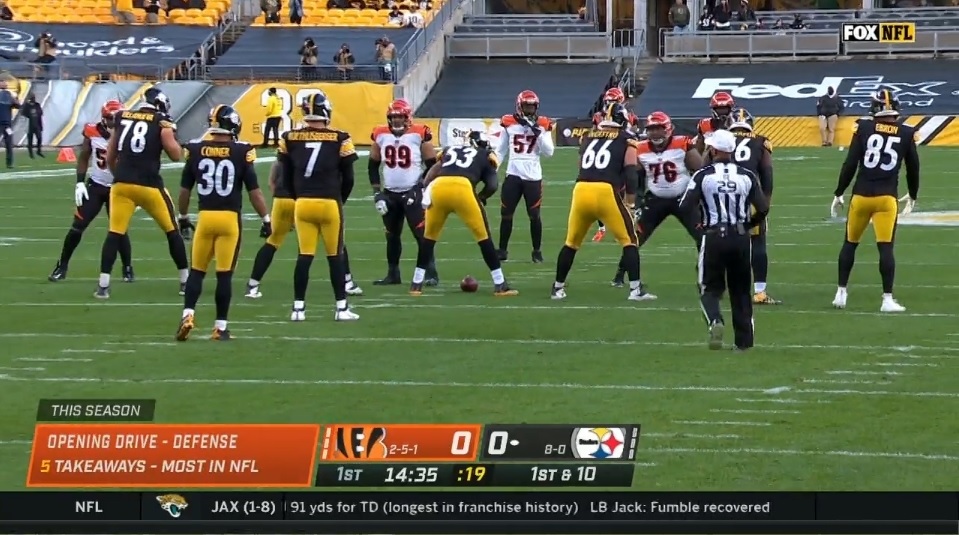 The Pittsburgh Steelers have been struggling to run the ball for the past month. Much of that blame falls on the offensive line. But they’re doing one thing right. This front five is pass protecting as well as any group in football. After another sterling Sunday performance, Ben Roethlisberger made sure to shout them out in his post-game presser.

“When we’re in [01 personnel], a lot of times, a lot falls on the line too,” he told reporters after beating the Bengals. “Because there’s not a lot of protection. You don’t have tight ends blocking or a back in there helping. So it’s five guys on whoever’s rushing. So we’re putting up good numbers when we’re in those personnel groups, but really it starts up front with those guys giving me time to then get the ball to the playmakers and let them make their plays.”

Pittsburgh’s pass heavy sets have left the team with just five – the big guys up front – to protect Roethlisberger. And they’ve done their job. Roethlisberger hasn’t been sacked in his last 104 dropbacks. He’s been taken down just twice in the last four games. Both blemishes came against the Baltimore Ravens and we only put 1/2 of those sacks on an offensive linemen, charging RT Chukwuma Okorafor.

It’s a little trite to say and doesn’t excuse the run game woes but this offensive line was built to pass protect. The investment was for Ben Roethlisberger, not the running backs. And they’ve been among football’s best year-in, year-out for at least the last five years. Some of that falls on Roethlisberger’s quick release, no QB gets the ball out of his hand quicker than #7, and some of that is thanks to the bevy of weapons as his disposal.

But it’s not easy for the offensive line to be put on a collective island in these four receiver sets and the sheer number of times the Steelers have thrown the ball. Roethlisberger is averaging well over 40 dropbacks a game this past month. He’s been sacked just ten times all season.

This unit is communicating well, recognizing stunts and biltzes, and winning tough matchups. With LT Alejandro Villanueva and LG Matt Feiler slated to hit free agency in the offseason, enjoy this group while they’re still together.