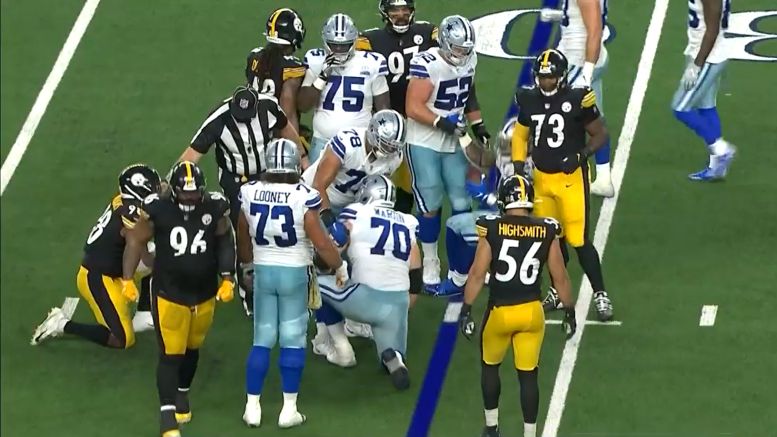 Down two defensive linemen, the Pittsburgh Steelers have had to call upon young and inexperienced reserves in recent weeks in order to fill their ranks behind Cameron Heyward and Stephon Tuitt, who have remained mercifully healthy so far this season, the latter in particular, given his own injury history.

Chris Wormley went down a few weeks ago, and Tyson Alualu missed most of the past two games. While the latter appears to be potentially on track to returning this next game, Wormley will miss more time. Their combined loss on Sunday resulted in all three of Isaiah Buggs, Henry Mondeaux, and rookie Carlos Davis logging significant snaps against the Dallas Cowboys.

We got a chance to hear from defensive line coach Karl Dunbar earlier today, and the first question he was asked was whether or not they went into the season knowing that these young linemen could potentially help them. “What do you mean did we know that they could potentially help us?”, he asked. “They are on the team for a reason”.

Buggs, a second-year former sixth-round pick out of Alabama, was on the 53-man roster all of last year and dressed for most games following Tuitt’s injury, though played sparingly. He has had a more active role this year, especially in the past two weeks.

Mondeaux, a former undrafted free agent, was first signed last year and spent the season on the practice squad. That is where he began this year, but was called up three weeks ago, primarily for special teams, but also to see time on the line. Davis, a seventh-round pick, has been on the 53-man roster all year, but had been a healthy scratch. He logged 16 snaps on Sunday.

“They are backups, and they got called to duty. I think they did a great job. I think I always knew they could help us”, Dunbar said. “We didn’t know how much they could help us because we have Wormley and we have Tyson, but when those guys got banged up, I think Buggs and Mondeaux and Davis, they answered the call”.

He also invoked a John Mitchell saying, the Steelers’ assistant head coach who for a few decades held the same job as Dunbar. Mitchell once coached Dunbar as a college player at LSU, so there is something of a lineage there.

“I think those guys understand what we want and they tried to go out there and play to a standard and I think that is the great thing about having them young guys”, he said. “When I was at LSU, Coach Mitch was our defensive coordinator, and he always used to say, ‘if a dog will bite, he will bite as a pup’. These guys are starting to sharpen their teeth on getting some playing time”.

Both Mondeaux and Davis registered tackles for loss on Sunday. Buggs has been able to generate a big of pressure in the passing game in recent weeks as well. With Alualu possibly returning, Davis will likely return to the inactive list. When Wormley gets back, one of Buggs or Mondeaux will likely be inactive as well. But in the meantime, they are helping out the line.