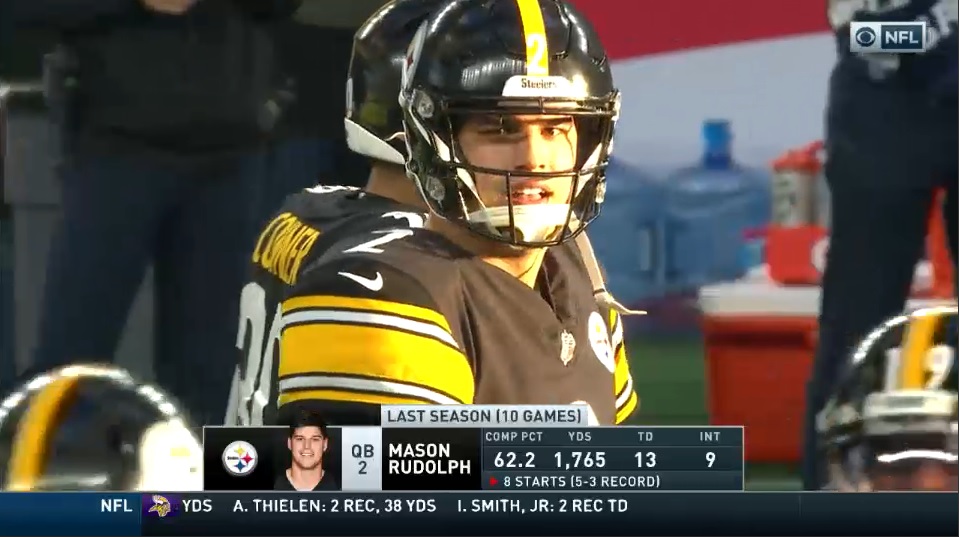 Hidden within a Ben Roethlisberger-led comeback victory over the lowly Dallas Cowboys was a drive quarterbacked by Mason Rudolph. Due to a shortened preseason that eliminated any games, it was hard to see any sort of development from the young quarterbacks on the Steelers roster. While Rudolph did see seven snaps against the Browns in week six, three were kneel-downs and he only had one pass attempt in the other four snaps which was a screen to the running back.

So while it was an extremely small sample size, we did get to see Rudolph for meaningful snaps for the first time since last years’ Week 16 game loss to the Jets. After a Cam Sutton forced fumble recovered by Minkah Fitzpatrick with 52 seconds left in the first half, Rudolph trotted out with the offense while Roethlisberger was in the locker room getting his knees evaluated from a hit on the previous drive.

The first play is a version of the smash concept out of trips. Smash is a curl route from the outside receiver and a corner from the slot. Normally it comes from WR2 (Claypool in this situation) with WR3 (Smith-Schuster in this situation) running a flat, but on this play, roles are reversed. The Cowboys are playing a Cover 3 Buzz defense. Smash against any type of  Cover 3 you’re going to be reading the front side cornerback. If he sticks with the curl you hit the corner. If he stays deep, you look curl to flat. Mason does just that and hits Claypool on the flat as the buzz defender would have slipped under the curl.

One thing to note about this play is it’s weird to have the receiver running the corner lineup off the ball. You see here Smith-Schuster is lined up two yards off the ball which gives you an obvious disadvantage when running a deeper route, it takes too long to develop. It is something defenses can key on when they see, but if you have other plays in the same alignment a key is all it is.

I’m fine with Mason taking what the defense gives him here, but I can’t help but think this may be a play that Roethlisberger plays with cornerback and tries to make him bite with a subtle pump fake. You can see the safety has no shot at making a play. If you pump it and straighten Smith-Schuster out with the throw you may have something or you chuck it over the flat routes head.

Instead, you have a 1-yard gain.

On 2nd-down the defense is playing a form of Cover 2. Rudolph recognizes this and smartly goes through his progressions, not throwing any flat routes into a Cover 2 corner sitting on them. Then while under pressure, calmly finds his check-down, James Conner, sitting in the middle of the field for two yards.

On 3rd & 7 with 0:18 left on the clock things start to get a little wild. The Dallas secondary is playing Cover 1 and strap up the Pittsburgh receivers. Rudolph starts to feel the backside pressure and works his way up and out of the pocket. He then throws across his body to Claypool who tips the ball up in the air and it somehow ends up in the arms of Smith-Schuster.

While this is viewed by many as a rough play by Rudolph, and live I definitely wiped the sweat off my brow from the shear luck of the play, watching it back I don’t mind it. Last year, we saw Rudolph seem like he was constantly playing not to screw up. This showed me he was playing to make a play, and guess what? A play happened, luck or not. In the end, the glass half full point is moot due to their being offsetting penalties.

Rudolph’s final play was a replay of 3rd & 7, this time with only 7 seconds left. This may be the most confusing play of the game for me. You have the ball on the fringe of field goal range at the 36 with a timeout. So you only have time for one quick play to get into a more manageable field goal.

The Steelers come out in quads to the left with Eric Ebron split out 1-on-1 on the backside. What you’re seeing Rudolph do here is size the matchup presnap, but you should do nothing more than peak at the backside to see if the corner trips, falls down, etc for the possibility of a walk-in touchdown. Frontside the Cowboys were literally giving the Steelers 10 yards if you throw to Conner behind three receivers. You get ~10 yards, call a timeout, and kick a 44-yard field instead of a 54-yarder. It baffles me why Rudolph would throw a 50/50 jump ball to Ebron here. It truly doesn’t make the slightest bit of sense.

Luckily, Boswell drills the 59-yarder anyways as the 1st half expires.

Overall there are not many conclusions to draw here from Rudolph’s play, as you couldn’t get a much smaller sample size. You saw some aggressiveness out of him on the final two plays, one that I agree with, one that I couldn’t distance myself further from. Either way, I’m hopeful the only reason we have to see Rudolph this week is in 4th-quarter garbage time.