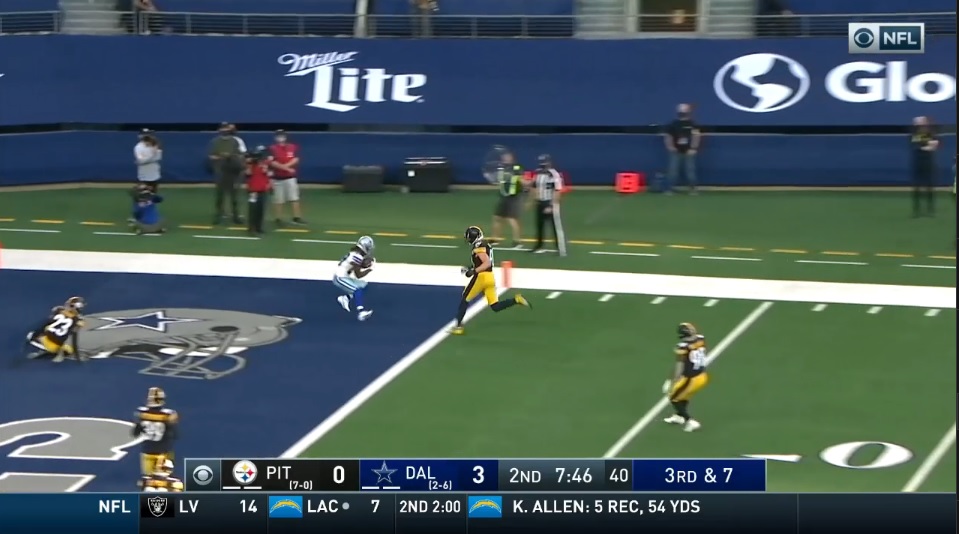 I have to give Keith Butler credit for fixing mistakes that plagued this defense two years ago. Schematic failures, matchup nightmares, seemingly basic missteps that led me to call for his firing. Largely, those issues have been resolved, in part thanks to the overabundance of talent that made coming up with answers pretty easy. Unfortunately, this defense fell back into old habits Sunday.

Butler made no bones about his gameplan. Stop the run. Stop #21. Zeke. So he stayed in his base defense as much as possible, 43 of 71 total snaps Sunday. That’s 60.6%, an unusually high number in this day and age where on average, that number hovers closer to one-third.

It wasn’t all a response to what Dallas was doing either. The Cowboys employed their 11 (three receiver) personnel on total 40 snaps. Pittsburgh stayed in their base 3-4 defense for 16 of them. That’s 40%. If you take away the two end-of-game drives where the Cowboys weren’t going to run it, that percentage spikes to 53%.

Prior to the Cowboys’ game, the Steelers were in their base defense just 20% of the time against 11 personnel. So sure, what Pittsburgh did yesterday wasn’t brand new. But what happened against Dallas wasn’t effective and the numbers prove it.

Of the 16 plays Dallas had out of 11 personnel against the Steelers’ base 3-4, they threw it 12 times. And Garrett Gilbert carved them up. Here was his stat line.

He also added two scrambles for another 26 yards. So on the Cowboys’ 12 dropbacks, they racked up 95 yards. 75% of them were successful.

On every other pass attempt, Gilbert had a 51.8 QB rating. Increase of nearly 80 points against the Steelers’ base front.

These weren’t difficult throws either. In their base defense trying to defend three wideouts, Pittsburgh had to play more zone coverage. Can’t have linebackers explicitly trying to man up on CeeDee Lamb or Amari Cooper. Of the ten throws by Gilbert, the Steelers were in zone 60% of the time. That create soft windows underneath to receivers with linebackers unable to close. Easy throws for Gilbert and the Cowboys’ offense to stay on schedule. 2nd and 10 completion against zone to Amari Cooper. Sets up a 3rd and 2 that they pick up.

And when they showed more man or matchup zone, the linebackers predictably had little chance to actually defend. Like Keenan Allen did to the defense a few years ago, they targeted the #3 (slot) receiver and picked on the Steelers’ linebackers. Here, TJ Watt tries but fails to carry Lamb vertically and Gilbert hits him for the score. Watt doesn’t have a chance here, an obvious mismatch.

The other issue was a lack of a pass rush. A problem throughout the game, sure, but compounded by this decision. Linebackers now had to be responsible for covering receivers or at least spot dropping in zone coverage. In these situations, Dupree dropped into coverage 20% of his snaps. For TJ Watt it was much higher, dropping 50% of the time, four of eight. The Steelers blitzed just once and only recorded pressures on two of Gilbert’s dropbacks. Neither resulted in a sack.

What this grouping did was put linebackers on receivers, force the Steelers to play softer, zone coverage, and didn’t let your top pass rushers get after the quarterback like they’re drafted and paid to do. None of that is good for this unit.

But The Steelers Stopped The Run, Right?

After all, that was Butler’s goal of staying in base in the first place. About that…

First, Dallas ran the ball just four times. They weren’t dumb. They knew the matchup advantage they had and acted accordingly. Throw the ball to their top-level wideouts. And on this four runs, Dallas gained 41 yards – over ten yards per carry – and had a 50% success rate. We’ll cover that in a separate article (the Cowboys finally figured out how to solve the Steelers’ over front) but the numbers show that wasn’t successful either.

This felt like a team hamstrung by injuries and a coaching staff too focused in on the run. Butler clued as much leading up to the week, saying Elliott and backup running back Tony Pollard were “their two best players on offense.” It assumed Gilbert couldn’t lead the charge (he could). That the receivers couldn’t make plays (they did). But Pittsburgh made it easy on them and paid the price.