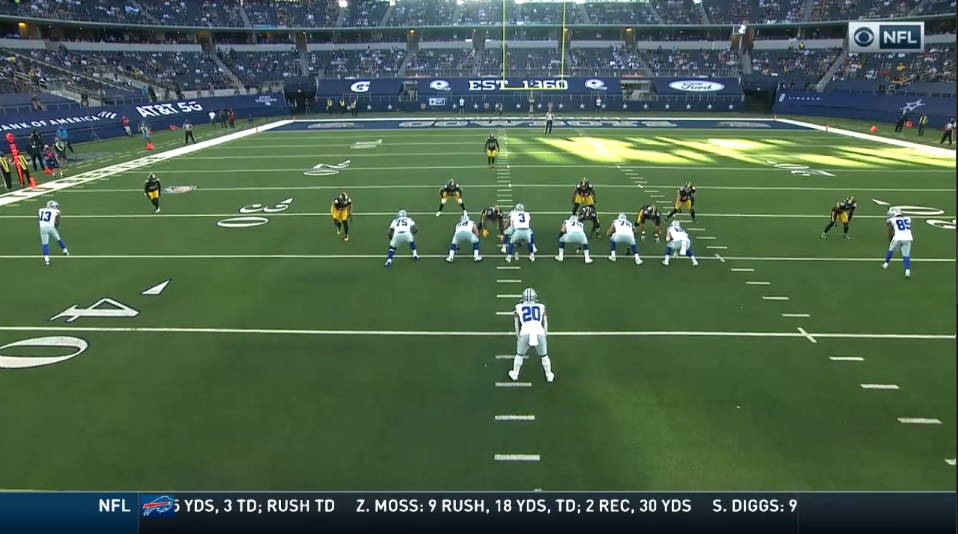 Throughout the entire season, I’ve praised the Pittsburgh Steelers’ over front, dubbing it the NFL’s best kept secret to their run defense. No team had solved how to handle the Steelers’ shifting their front to the strength of the line, putting Cam Heyward over tight end and bullying him time and time again.

Until Sunday, that is. Dallas was the first team to adjust and figure out how to attack Pittsburgh’s front.

The Cowboys had nine runs against the Steelers’ over front. Here are those results: 9 carries, 57 yards (6.3YPC), 55.6% run success rate. To put that in perspective, the Steelers allowed seven total yards (0.5 yards per carry) with their over front prior to Week One.

So what secret did the Cowboys unlock? It was a simple one.

Run away from the over shift. That was a simple idea I suggested when asked how I would counter this approach earlier in the season.

Yeah, you're going to have to do something. Balance out the look, run away from the strength. Can't get at the DE on the TE.

And that’s exactly what the Cowboys did. Six of Dallas’ runs were weakside, away from the tight end and importantly, away from the DE pitted him. Here’s the breakdown of the Cowboys’ runs away and to the defensive strength.

Stark difference. When the Cowboys ran away from the Steelers’ shift, even when it was to their weakside, they succeeded. Let’s check out the tape.

Two of their runs against the Steelers’ over front turned into 20 yard gains. First example comes from backup RB Tony Pollard. Steelers in their over against the Cowboys’ 11 personnel. Bit of a curious decision given Pittsburgh normally doesn’t shift their front unless they’re seeing a two back set or multiple tight ends to one side of the formation. 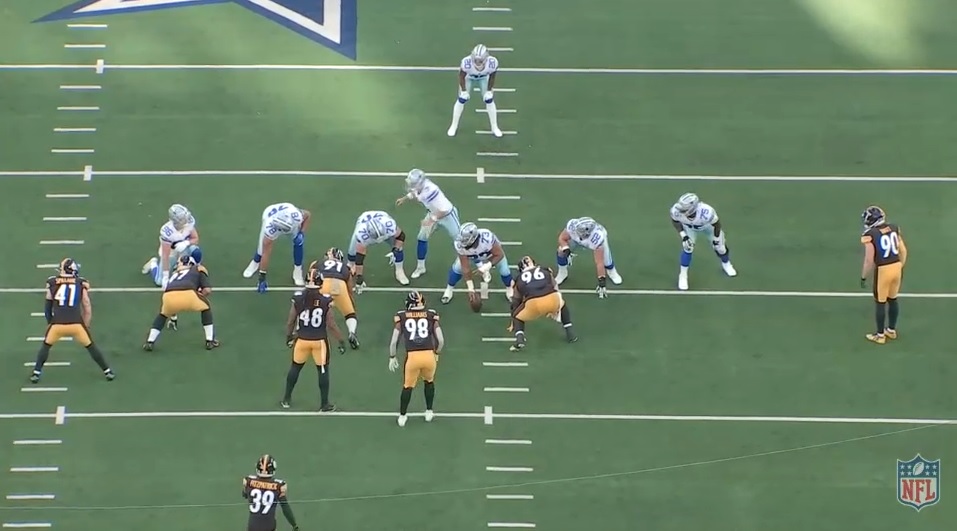 Dallas does the smart thing and run away from Heyward on their TE. Sure, they’re now running to the weakside of the formation but they have a better box count and better matchups. LT on the ROLB, center on the NT, LG climbs to the linebacker (Vince Williams). Pollard hits the B gap and explodes into the second level for 20 yards. May have been able to flag the LG for holding but that’s a pretty solid block and a sound scheme from Cowboys’ OC Kellen Moore.

Crucially, all the TE has to do is try to cut block Heyward, an easier task than winning the point of attack with a base block. It’s semi-successful but it doesn’t much matter. Heyward is removed from the play.

Dallas does the same on Pollard’s other 20 yard run. Here, #99 Henry Mondeaux is aligned over the tight end. Dallas runs weak away from their tight end but to the field/open side of the field where the back has more space to work with.

Some other potential issues on this play. Individual failures. Stephon Tuitt wins his battle and spills the run, forcing Pollard to bounce it. TJ Watt spikes inside and there’s no edge contain, Pollard hitting the corner and breaking into open grass. It feels like Watt was trying to do too much, make a play in the backfield, and got burned. Perhaps one of the ILB’s like Robert Spillane were supposed to scrape over, he got caught up in traffic and lost his footing, but regardless, it’s a big gain. And again, all the TE has to do is provide a backside hinge block.

Last clip we’ll look at. 3rd and short. Looks like the Steelers are trying to adjust by placing the off-ball LB (in this case, TJ Watt) in the weakside A gap while rolling Terrell Edmunds down into the box. Force them to run strong into Heyward or run weak into the LB and SS where the Steelers have a better box count.

A wise adjustment but still, it’s not enough. Dallas is happy to run away from Heyward and Elliott plows forward to get just enough to move the sticks. This one isn’t as pretty as the first two clips but it’s still successful. And again, Heyward’s matchup on the TE is meaningless.

And when Dallas did run strong? It had ugly results, as the stats above show. Two carries went for a loss, the other for three yards. In the first half, the Cowboys try to run a toss play to the Steelers’ strength. Cam Heyward blows up the TE, the front seven flows well, and Pollard’s tackled by Williams for a loss of one.

I’m not going to be super critical of Keith Butler here like I was yesterday. I’ve just been waiting for someone to make an adjustment against this Steelers’ front. A team to wise up and not run into the brick wall that was a Heyward beating up a helpless tight end. Kudos to the Cowboys for making the correct adjustment, running away from the strength, to get their run game going. These are some of the reasons why the run game has suffered beyond the injuries so it was worth breaking down.

Count on teams noticing on tape how this was successful. And you can see Butler attempting to counter by putting more defenders weakside, like you saw in the third clip. The chess match continues. That’s what makes the NFL so fun to breakdown. Battle within the battle.