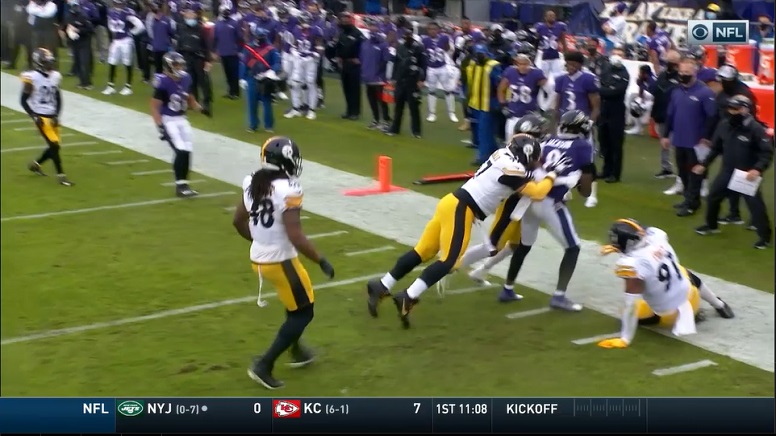 Defensive penalties sure played a big part in the Sunday game between the Pittsburgh Steelers and Baltimore Ravens. The lone one against the Steelers was not only very controversial, it instantly impacted the game as the third down Unnecessary Roughness penalty on Pittsburgh defensive tackle Cameron Heyward not only kept that drive alive, the possession ultimately ended in a touchdown to tie the game 7-7.

On the play inn question, Ravens quarterback Lamar Jackson avoided the pass rush in the pocket by escaping the pressure to his right. While on the move toward the sideline, Jackson was bottled up by safety Minkah Fitzpatrick and defensive end Stephon Tuitt with about five yards remaining until he’s out of bounds. However, instead of going out of bounds, Jackson slipped the tackle attempt of Tuitt and then took on Fitzpatrick, who proceeded to stand the quarterback up and started helping him toward the sideline.

While still in bounds, Heyward came from behind for good measure with solid contact on Jackson that forced the quarterback out of bounds with Fitzpatrick having ahold of him. Jackson tumbled to the ground out of bounds and the nearest official threw a flag to penalize Heyward. It was a bogus penalty as Jackson had every opportunity to just go out of bounds long before Heyward had arrived.

Steelers fans aren’t the only ones that took issue with the penalty issued to Heyward as one prominent major media analyst has now as well. On Monday afternoon, Brian Baldinger of NFL Media posted a narrated video breakdown of the play in question on Twitter. In that video, Baldinger perfectly described why Heyward shouldn’t have been penalized.

“If he’s not going to go out of bounds, and he’s inbounds and Cam Heyward comes and puts the boom on him, inbounds, legal, and they throw this flag, that’s a problem,” Baldinger says in the video. “With all these quarterbacks that can run, Russell Wilson and Josh Allen and Kyler Murray, if they’re not going to go out of bounds, or get down, and they’re staying in bounds and a defense hits them, then they have every right to bitch about this call because that’s a league problem right there.”

I couldn’t have said it any better than Baldinger did and apparently Heyward feels the same the way as he responded to the analysts’ tweet with one of his own.

“If he’s given the chance to go out of bounds and doesn’t take it, what am I suppose to do?” Heyward asked Baldinger on Twitter. “I made contact while he was inbounds. Mind boggling.”

What will really be mindboggling at this point is if Heyward is fined by the NFL this coming week for his hit on Jackson. If he isn’t, it will be a clear message from the officiating crew in Sunday’s game made a big mistake in penalizing the Steelers defensive captain. Stay tuned as we’ll keep you posted on if Heyward gets fined later this week.

If he’s given the chance to go out of bounds and doesn’t take it, what am I suppose to do? I made contact while he was in bounds. Mind boggling