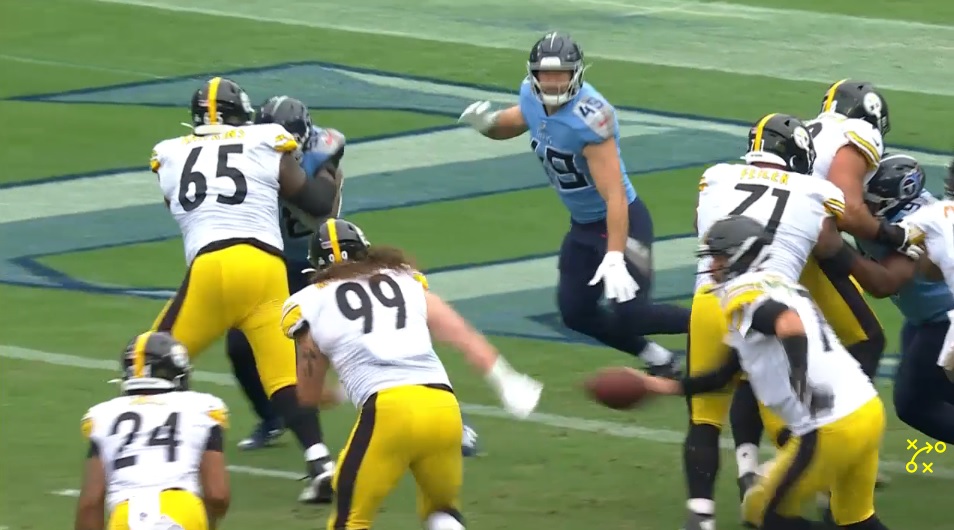 1. Whew! – Well I’m going to have to install new carpet after wearing a path pacing back and forth in the second half. The Titans are a very good team so any win on the road against them is big especially a conference win that could have implications down the road. It was a weird game with a twenty point lead,  each team winning a half, crazy ball bounces and it came down to a missed field goal by one of the better kickers in the last twenty years. In the end it’s a big win against a good team on the road.

2. Wide Receiver Wonderwheel – Coming into this season it was easy to see that this was one of the most talented groups of the Steelers have had in recent memory and it is being proven on a game to game basis. Each week a different player seemingly takes center stage and becomes the lead actor for a show. Chase Claypool had the biggest day with 4 TD’s. Juju Smith-Schuster and Diontae Johnson have each had 2 TD games. Washington has been the quietest of the group but still had 68 yards and a TD last week. Very hard for defenses to stop multiple receivers let alone stopping four.

3. 65 is Eligible – Without many fans in the stands Jerald Hawkins has not garnered the same kind of affection that Zach Banner received last year as the tackle eligible on the offense. After being brought back to Pittsburgh earlier in the year he has had some ups and downs as a blocker but he deserves a little credit this week. In particular was the drive that led to the Benny Snell touchdown. Hawkins had a nice block on the right edge I believe against Jadeveon Clowney that sealed the outside for James Conner. Then followed it up with a block clearing the way for Snell on the TD run. The Steelers are getting quality contributions from everyone on the roster.

4. Nice Day for a Sunday Drive – The Steeler first two drives were like an elderly couple heading to the kids house for Sunday dinner. They were long distance, time consuming and they got to eat at the end. Sixteen plays, 75 yards and 9:18 off the clock, TD. Thirteen plays, 61 yards, 7:05 and a TD. Methodical drives that wear on defense and put points on the board are a great way to start games.

5. Watch Your Backside – I find it interesting that week after week the opposing team chooses to not block the backside linebacker. Each week we get to see the likes of Bud Dupree and T.J. Watt making plays at or behind the line of scrimmage on runs going away from them. Even Alex Hightower was getting in the mix today.  A lot of credit goes to the front side of the defense allowing these plays to happen but it’s like opposing coaches are willing to accept negative plays when they do this.

6. Who’s the MIKE? – Against the potent running offense of the Titans, Keith Butler had to get creative. This week they mixed in a lot of four man front looks with Bud Dupree becoming the roaming linebacker in the middle of the defense.  Prior to this week there was only two plays were Dupree was aligned in the middle of the field so it was something the Titans probably didn’t prepare for.  Nice move by Butler to mix things up and make the other team adjust.

7. I Can Feel It Coming – It’s been a long time. We’ve been waiting for two and half years but its right there, I can feel it. Terrell Edmunds is on the verge of becoming a playmaker for this defense.  He made a nice break on a ball and nearly had an interception.  He broke up another pass in the end zone. Those two plays give him 5 passes defensed on the year which is already a career high for a season. He’s blitzing more and making more plays near the line of scrimmage.  It has been a slower progression than we hoped for and it’s not completed yet but the arrow is pointing up for Edmunds.

8. There Is Always That One – Normally by this time in the season I’d have plenty of complaints about the coordinators but honestly this year they’ve been pretty good. I touched on Butler’s work above. As our own Dr. Melanie Friedlander pointed out on Twitter, “Man, #Steelers special teams is 8000% better this season.” And she’s right so I don’t have many complaints about Danny Smith. That leaves offensive coordinator Randy Fichtner who has performed well. But there is always one group of play calls that are frustrating. The second drive of the third quarter had a screen play (which they’ve struggled with), a draw (maybe going to the well one to many times) and a quick pass to DJ (that the Titans had already seen twice).  Maybe all OC’s have this happen to them during the game as well.

9. But Can He Blitz – The Mike Hilton injury opened up a chance for Cameron Sutton to get more playing time and the initial results seemed pretty good. He showed strong tackling ability with 4 unassisted tackles.  He was credited with two pass breakups and was solid in coverage overall. There was one mishap on the first Titans TD that had him and Minkah Fitzpatrick talking to each other after the play. Overall Sutton again showed why he is valuable to the team.  It has yet to be proven if he can blitz like Hilton though not many can.

10. Not What I Would Have Done – Late I the first half the Steelers were gifted great field position after a gaffe by the Titans punter. With 14 seconds left on the clock at the 37 yard line Ben Roethlisberger opted to take a shot to the end zone and it was intercepted.  With 14 seconds, they could have ran one or two quick outs to try to gain a few more yards and give Chris Boswell a chance at field goal.  Roethlisberger has shown a lot of trust in his WR’s and that is great but situationally I think he made a poor choice here.