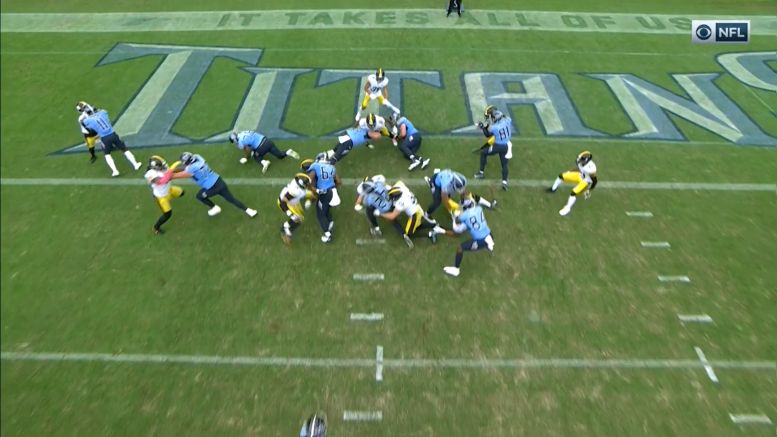 Pittsburgh Steelers head coach Mike Tomlin cited controlling possession—and controlling the ball—as crucial elements in their plans in keeping Tennessee Titans running back Derrick Henry, the NFL’s leading rusher, in check. They were able to do that to open the game. In fact, they controlled possession for more than 13 minutes in the first quarter alone, and jumped out to a 14-0 lead at the end of their first two possessions, both of them on extended drives.

They opened the game with a 16-play, 100-yard drive, overcoming two penalties that totaled 25 yards, to get into the end zone, a drive that spanned 9:18. By the time the Titans finally got the ball, they didn’t know what to do with it, and when three and out. The Steelers responded with a 13-play, 61-yard touchdown drive that lasted 7:05.

Of course you can only do so much on offense to control the opposing offense, and the Titans did start to get things moving on their second drive, a 12-play, 70-yard effort that also got into the end zone. Henry carried the ball five times on the drive for 21 yards, including a 14-yard gain for their first first down of the game.

Unfortunately, it didn’t last. The third-down offense and the ball security slipped starting with the final play of the first half, albeit resulting in a meaningless interception. In the second half, however, the Steelers struggled to convert, and a Ben Roethlisberger interception also led to a field goal.

Everybody knew entering the game just who Henry is. He is a big back who feeds on being fed. They finally found opportunities to give him the ball in the second half, and he responded in the fashion that you would expect Henry to respond.

His legs started churning. He was bursting through the line, shedding tackles. The defense did stuff him on third and goal from the one, but after a penalty on fourth and goal, he got another opportunity to punch it in, and he dove over the pile for the score, bringing the Titans to within just three points after trailing 24-7 at halftime.

It looked as though the game had broken and that it was simply a matter of time before Tennessee would prevail. They nearly did—or at least nearly forced overtime—but in the end, the luck finally broke Pittsburgh’s way with a missed field goal.

Overall, Henry finished with 75 yards on the ground on 20 attempts, averaging 3.7 yards per carry, with one touchdown. He had minus-three yards on two receptions on that final drive of the game. The Steelers nearly let him slip through their grasp, but in the end, they had just enough in them to force a game-tying field goal attempt that fell short.

For a 6-0 start, against a previously undefeated team? I’ll take it.