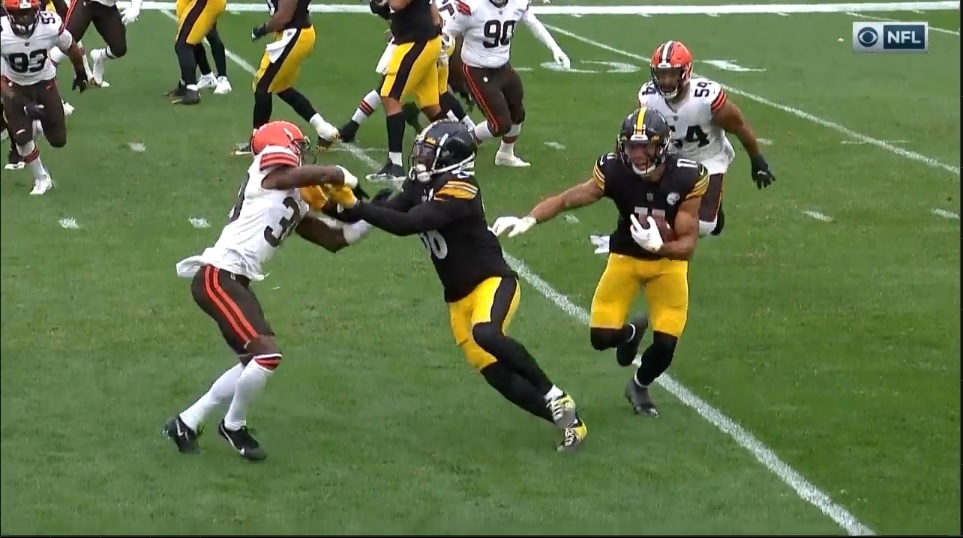 Pittsburgh putting the hammer down on Cleveland? Not weird. But these stats sure are.

– Pittsburgh moves to 5-0 for the first time since 1978, the only other time they’ve done it. They won their 3rd Super Bowl that year.

– Since the NFL moved to a 16 game schedule in 1978, 71 teams have begun their season 5-0. 90% of them made the playoffs. 17% of them won the Super Bowl. With seven teams making the playoffs from each conference, it’s hard to see Pittsburgh sitting things out come the postseason.

– Chase Claypool found the end zone for the 6th time over his first five games. Matthew Marczi wrote where that stands among WRs in NFL history. To focus it on Pittsburgh. He far and away has the most TDs by a Steelers’ rook over the first five games of the season. His six are two more than second place, a two-way tie between Johnny Lattner (1954) and Louis Lipps (1984). Both those guys had four.

Claypool has tied the record for most Steelers’ touchdowns through the first five games by any player. Here’s that list.

For the record, Lattner, Bettis, and now Claypool all attended Notre Dame. Those Fighting Irish know how to find the end zone.

– Claypool is the first Steelers’ WR with at least two rushing TDs in a season since Ray Mathews (he was a bit of a hybrid WR/RB) did so in 1953.

– After the game, Ben Roethlisberger mused when the last time he was taken out of a game (non-injury related, of course) with eight minutes left. We have the answer. 2018’s big win over the Carolina Panthers, a 52-21 Steelers’ win, where Roethlisberger was removed for Josh Dobbs with 11:01 to go in the game.

– Benny Snell, James Conner, and Claypool all had rushing TDs today. The last time three different Steelers rushed for a score in one game was – and this surprised me – all the way back in 2011. Isaac Redman, Rashard Mendenhall, and everyone’s favorite John Clay had one apiece in a 27-0 win against the Rams.

– Over the last five years, 2016 to present (nine games), the Steelers’ defense has sacked Browns’ quarterbacks a total of 44 times. An average of 4.9 per game. As they did Sunday, they’ve had 4+ sacks in seven of those nine games.

– Minkah Fitzpatrick recorded his first INT since Week 10 of last year. It’s the first takeaway caused by a Steelers’ safety since then. More droughts ending.

– Fitzpatrick had as many trips to the end zone as the entire Cleveland offense.

– The Pittsburgh Steelers have possessed the ball for 34+ minutes in three straight games. That didn’t happen once in 2019. They haven’t done it in three consecutive games since Weeks 7-9 in 2014, wins over the Texans, Colts, and Ravens.