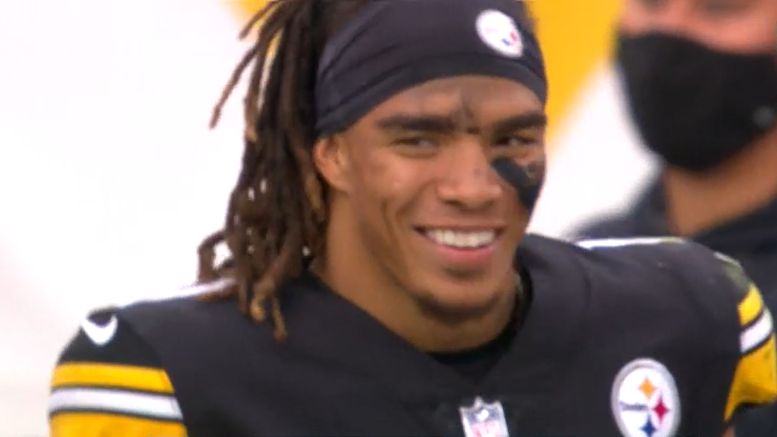 Chase Claypool exploded onto the national stage last week, even during a 1PM start, with a four-touchdown performance for the Pittsburgh Steelers against the Philadelphia Eagles, a rare feat for a rookie, and exceedingly rare for the Steelers, who had not accomplished that since 1968.

It was great, of course, but the question was what he would be able to accomplish as an encore performance. Obviously, he wasn’t going to score another four touchdowns, but with more attention being paid to him by opposing defenses, would he still find himself getting open over the top?

As it turns out, the answer was yes, and while he didn’t score on the drive, he set up the Steelers’ first offensive touchdown of the game with a big 36-yard catch down the left sideline, looking a lot like his 84-yard touchdown. He just beat his man down the field and used his great wingspan to reach out in front of him and pluck the ball. James Conner scored from three yards out on the next play to put the team up 17-0.

More significantly, his shortest play of the day, a three-yard run, proved to be the most significant, as it put him in the end zone. It was his second rushing score in as many weeks and on the season, and his sixth touchdown overall in the first five games of his career.

That tied him for the most touchdowns scored by a rookie wide receiver in the first five games of their career in the modern era—tied with, among others, former Steeler Martavis Bryant. The others are Randy Moss, Calvin Ridley, and Willie Gault.

.@steelers WR @ChaseClaypool has 6 touchdowns in 2020, tied for the most by a rookie wide receiver through his first 5 career games since 1970. pic.twitter.com/cEnlqW91Eu

As shouldn’t be surprising, Claypool was the only one of those five total players who also scored on the ground to get those six touchdowns in addition to their receiving scores. Needless to say, that does not diminish his accomplishment, as any touchdown counts for the same number of points.

He very nearly added a second touchdown on a screen reception, getting not just the first down but deep inside the five-yard line. He stretched for the goal line and technically did get the ball to cross the plain, but his left elbow was down before doing so. So he very nearly set a record, off by about a yard.

Nevertheless, it was another impressive day for the rookie, catching four more passes for 74 yards, leading or tied for the lead on the team in both statistics, plus seven yards and a touchdown on two carries.

Ben Roethlisberger only attempted 22 passes for the entire game because the running game was so successful and they were able to build a quick lead, including a pick six, so there weren’t as many opportunities to go around as there would normally be. But he still averaged 7.4 yards per attempt, and over 11 yards per completion.

Claypool now has 17 receptions through five games for 335 yards with four receiving touchdowns, plus 21 rushing yards on six attempts for two more touchdowns. And a record for the most touchdowns scored by a rookie receiver in his first five games since at least 1970.