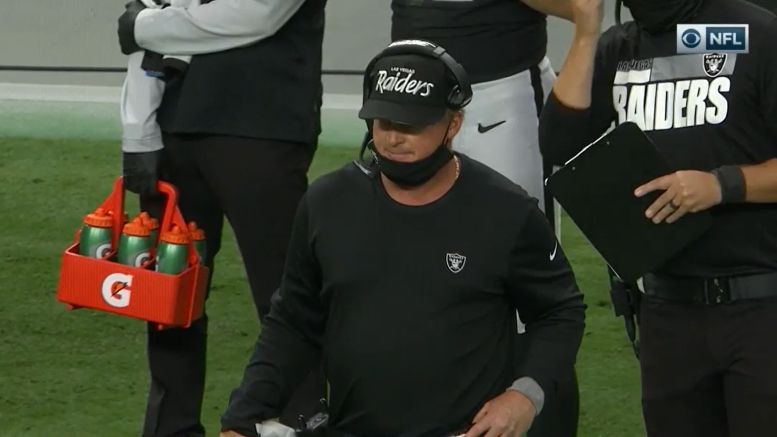 Imagine being so financially secure that you have the luxury of letting go of the mindfulness of health and safety protocols during a pandemic, the violation of which has already proven to be subject to, at a minimum, a fine of $100,000 for the individual and another $250,000 for that individual’s organization.

Jon Gruden was one of five head coaches who were fined earlier this season for violation of the league’s Covid-19-related sideline mask protocols, which were agreed upon jointly between the NFL and the NFLPA in late July as the two sides came to an agreement that would allow the players to report to training camp on time.

After a number of head coaches and other personnel were seen as clearly being lax with their masks on the sideline in week one, the league issued a strongly-worded letter to teams reminding them of the protocols. A week later, when many continued to do so, they began the fines.

And then another memo went out stating that further violations could be subject to even harsher penalties, that could include possible suspensions or the loss of draft picks. And Gruden, the head coach of the Las Vegas Raiders, again tested the limits of that protocol and the league’s seriousness.

Given the fact that it was caught on camera and publicized, and that it’s coming against the backdrop of the league’s first Covid-19 outbreak that resulted in the Steelers’ game against the Titans being postponed, one would imagine that the league intends to make Gruden an example.

The Raiders as an organization have already been fined for allowing an unapproved staff member into the New Orleans Saints’ locker room earlier this year. Last week, several players, including quarterback Derek Carr, were seen attending an indoor charity event in which nobody was wearing masks or social distancing. This issue was allegedly handled within the organization.

The NFL has issued multiple warnings, reminders, whatever you want to call it. There is no way at this point that any head coach can attempt to justify their non-compliance with the protocols by pleading ignorance, especially one who has already been fined for being in violation of it.

The league acted swiftly the last time they handed out fines, doing it a day later. If they intend to set an example and offer a penalty harsher than just a monetary fine, it might take longer, but I would be surprised if Gruden doesn’t receive some type of response form the league within the next couple of days.

Whether or not one agrees with the justification or efficacy of wearing masks, the protocols are pretty clear: wear one. if one cannot adhere to this, they open themselves up to being disciplined. These are the terms that the parties involved agreed upon months ago.