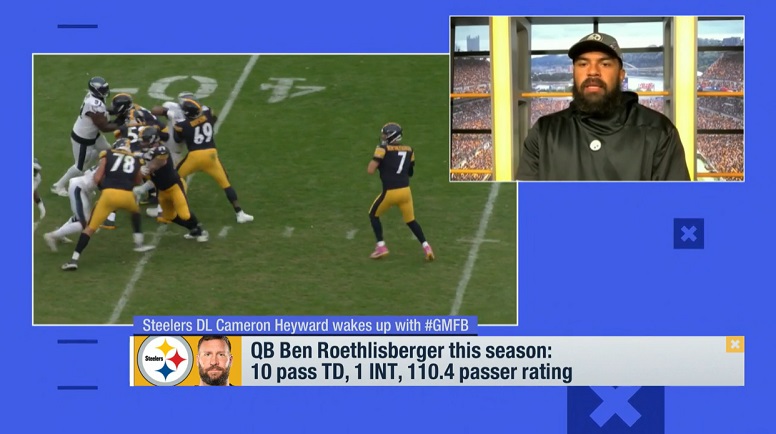 Pittsburgh Steelers quarterback Ben Roethlisberger is off to a great start in 2020 as he’s thrown 10 touchdown passes so far and just one interception in the team’s first four games. The last time Roethlisberger got off to this kind of start was in 2012 when he threw 9 touchdown passes and just one interception in the team’s first. So, is this vintage Roethlisberger we’re seeing to start the 2020 season? That’s a question Steelers defensive tackle Cameron Heyward was asked during his Thursday morning appearance on ‘Good Morning Football’.

“I don’t if it’s vintage Ben Roethlisberger, because I feel like he’s still growing,” Heyward said. “You know, I think he’s just continuing to improve. You look at the 10 TDs, but to only have one interception just shows you how much he’s taking care of the ball. Having a good run game, but then I think having all those wide receivers to throw to, whether it’s JuJu [Smith-Schuster], [Chase] Claypool, Diontae Johnson, James Washington, and then you talked about our tight ends, we’ve got a lot of weapons for him and I just think he’s tossing them all out. You know, he doesn’t have to be picky and just stay on one receiver, he’s able to get it out to everybody.”

Roethlisberger ended doesn’t seem to be forcing the football so far this season and according to NextGen Stats his 15.4 aggressiveness percentage, ranks him 20th overall entering Week 6. He has completed 69.9% of his pass attempts to date and when it comes to spreading the football around, five different Steelers players have already registered 11 or more receptions in this team’s first four games.

Sunday at Heinz Field, Roethlisberger and the Steelers will host the Cleveland Browns. Roethlisberger has owned the Browns since coming into the league as evidenced by his 23-2-1 career record as a starter against them. He’s also a perfect 12-0 against the Browns at home all-time and in only one of those games did he throw more than one interception.

“It’s just one of those things, Roethlisberger said Wednesday about his career success against the Browns. “They’re in our division, so we want to play hard against them. I’ve been a part of some really good football teams that have helped us win games against a lot of opponents.”

Roethlisberger is a part of yet another really good football team again in 2020 and if he continues to protect the football on Sunday the way he has in the team’s first four games, there’s a good chance he’ll remain undefeated in 2020 and also all-time at home against the Browns.