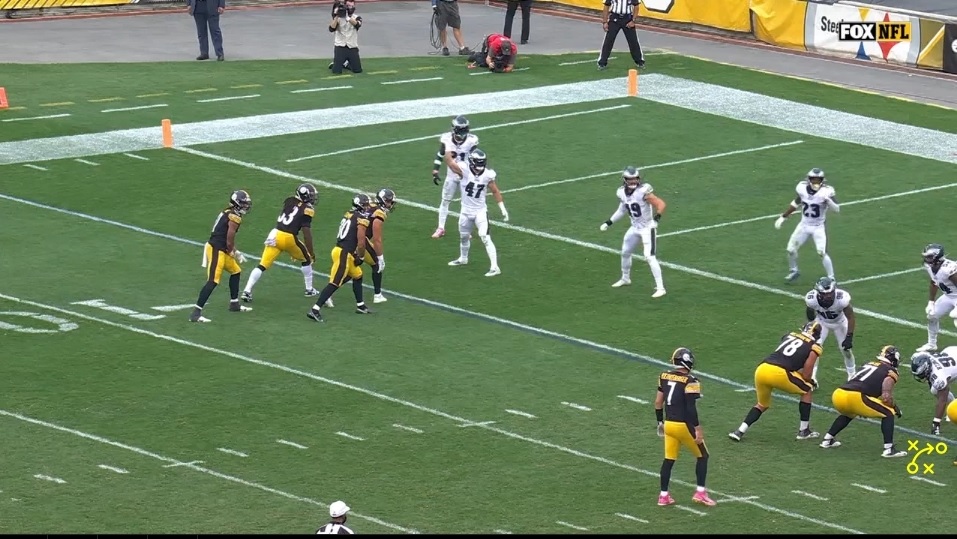 The Pittsburgh Steelers offense felt like they were coached by a different team in Sunday’s win over the Philadelphia Eagles. Through the first three weeks, they had begrudgingly used motion. And it wasn’t very effective. It felt like the team was saying, “ok, this is what the best offenses are doing so let’s use more of it too,” the same way you started making your bed each morning because you read it in The 5 Habits Of Millionaires.

I don’t want to assume the Steelers were less than enthused about the idea but they certainly felt robotic. No one felt comfortable running jets and sweeps and all the pre-snap motion you see from the likes of San Francisco, Baltimore, and Kansas City.

That changed yesterday. Motion became a central part of the offense and crucially, a much more effective component of it. It had a Kyle Shanahan type of vibe, no doubt influenced by Matt Canada, plays seemingly directly lifted from the 49ers playbook. And it was refreshing to see. Let’s take a look.

The best example of that comes from Ray-Ray McCloud’s 58 yard run down the right sideline. It was a brilliant design to play into the hands of an overaggressive Eagles’ front. This is a windback run end around to McCloud. One of Pittsburgh’s most popular gap concepts is a counter run with the backside guard and tight end pulling. Like here versus the Texans in Week Three.

Fichtner and Canada play off it on this run. RG Kevin Dotson pulls and TE Vance McDonald’s first steps follow behind but he pivots around to become a lead blocker for McCloud. Roethlisberger fakes the handoff to Conner on the counter before flipping the ball to McCloud. There’s a ton of lead blockers out in front. Alejandro Villanueva strafed down to the 2nd level with Maurkice Pouncey, Chukwuma Okorafor, and Eric Ebron creating a wall out in front.

Because the Eagles bit so hard with the RB track, the pulling guard, and McDonald’s initial steps, they’re playing catch-up as soon as McCloud gets the ball. Pay close attention to the SAM linebacker, #49 Alex Singleton (lined up to the inside of JuJu) bite on the misdirection. Slants down hard, Villanueva doesn’t even have to block him, and Singleton doesn’t realize McCloud has the ball until it’s far too late.

This is identical to a play the 49ers ran in last year’s NFC Championship Game. Same windback motion with the ball flipped to Deebo Samuel, who takes off for 32 yards.

But it isn’t the only example. Chase Claypool’s five yard touchdown early in the third quarter. Claypool gets motioned out to the field set for a 4×1 bunch set to the top. 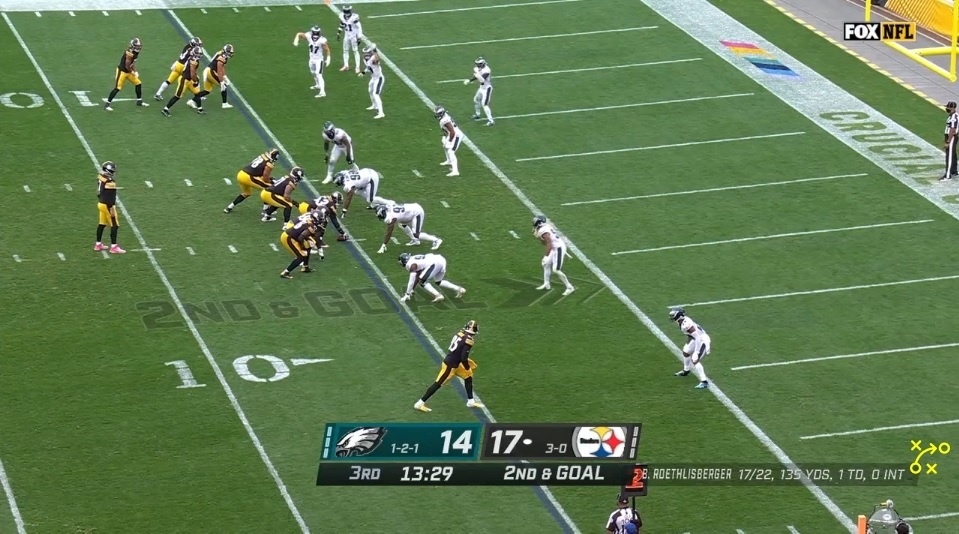 That type of set is something you see more commonly in the college game or again, by the Ravens of the world. Example from Baltimore against Houston last year. Isn’t as tight of a bunch nor a screen but you see the 4×1 looks.

Eagles try to respond and do get four defenders aligned wide but with three big blockers – Trey Edmunds, James Conner, Vance McDonald – and a 230 pound Claypool near the goal line, they don’t have much of a chance. Claypool easily works his way into the end zone.

This only scratches the surface of the type of offense Pittsburgh ran yesterday. Kudos to Randy Fichtner for leaving his ego at the door, incorporating Canada’s college game ideas to the Steelers’ attack. And for Ben Roethlisberger. Most of this is new to him, even for an 18 year vet, and not easy to manage while still coming off elbow surgery.

Pittsburgh saw what motion can really do to a defense yesterday. It can block players without actually getting a hat on them. It can make them think (which makes them play slower) and will make them less sure of their keys going forward. Fichtner and Canada can build off of this the rest of the season and be even more dangerous assuming Diontae Johnson returns for the Browns game Sunday.

I don’t remember the last time the Steelers’ offense evolved so substantially from a schematic standpoint and I can’t wait to see them add more wrinkles going forward.