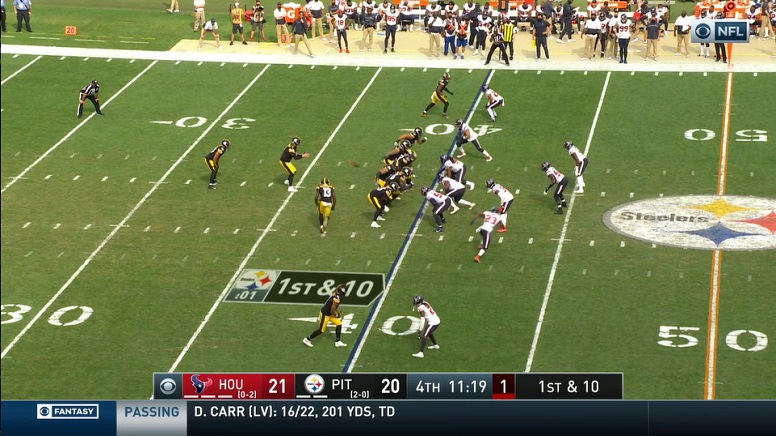 The Pittsburgh Steelers are certainly using a lot more motion on offense so far this season and especially when it comes to the kind that happens when the football is snapped. In case you missed it, the Steelers, according to ESPN, are 6th in the NFL in rate of motion at the snap with a number of 18.8%. What the ESPN data doesn’t tell you is how successful the Steelers have been this season when using motion at the snap of the football. I will do just that today in this post.

By popular demand: rate of motion at the snap for all 32 teams in 2020. Via ESPN's video tracking team. pic.twitter.com/ozbJTHbXAv

We’ve been charting the Steelers offensive and defensive plays for several years now and this season, Tom Mead has taken over the former. He’s also started charting the offensive motion this season and differentiating when it’s happening at the snap of the football. In total, Mead has the Steelers down for 34 such plays through the team’s first three games with 28 of those being running plays and the other 6 being drop backs.

On the Steelers 28 running plays so far this season that have included a player being in motion at the snap of the football, the total yardage gained was 80 yards, or 2.86 yards per carry. Just 12 of those 28 (42.9%) running plays were deemed successful and that’s not great at all. One of those plays was the fumbled end-around run by wide receiver Diontae Johnson early in the team’s Week 1 win against the New York Giants.

The Steelers longest run so far this season that included motion of a player at the time the football was snapped is 11 yards. That was achieved twice by running backs James Conner and Anthony McFarland Jr. in Week against the Houston Texans. You can see those two runs below.

Below is also a table that shows the breakdown of the 28 running plays by personnel grouping and down. 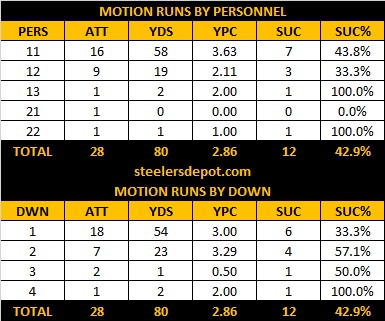 So, what about the six passing plays? Well, not so great overall, statistically.

On the six total dropbacks that we’ve charted that included motion at the snap of the football, four of the five passes that were ultimately attempted were completed for 18 yards in total. That’s just 3.6 yards per attempt. Just 3 of those 4 completions resulted in successful plays. the other dropback resulted in Steelers quarterback Ben Roethlisberger getting sacked and that play happened in Week 2 in the win against the Denver Broncos. You can see that play below.

Overall, the Steelers use of motion at the snap of the football hasn’t produced particularly good results. That noted, it’s still incredibly early in the season and the sample size is still very small, relatively speaking. We’ll check back in on these motion stats after three more game and by then the offense will have likely run 75 or more play with it.