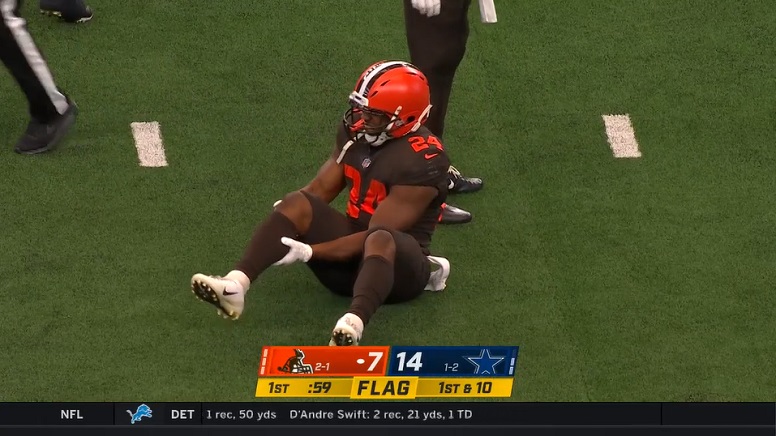 The Pittsburgh Steelers first 2020 game against an AFC North team will take place in Week 6 when they host the Cleveland Browns, who currently have a 3-1 record after winning on the road Sunday against the Dallas Cowboys. The Browns, however, won’t have staring running back Nick Chubb for that Week 6 game against the Steelers due to a knee injury he suffered against the Cowboys.

According to Browns head coach Kevin Stefanski on Monday morning, Chubb is being placed on the team’s Reserve/Injured list this week with an MCL injury in his right knee. While Chubb isn’t expected to miss the remainder of the regular season with his injury, he’ll now have to miss at least the next three games that Cleveland plays. The early reports are that he’ll miss around six weeks in total.

Chubb suffered the MCL sprain in his right knee late in the first quarter of the Sunday game against the Cowboys and you can see a replay of that injury below. He left that contest having already rushed for 43 yards on six carries.

In Week 5, the Browns will host the Indianapolis Colts. The Colts defense has allowed just 308 yards and a touchdown on 86 total rushes in their first four games of the season so it will be interesting to see if the Browns offense is ultimately able to have success on the ground against them.

The Steelers defense has allowed just 162 yards and a touchdown on 61 carries in their 3-0 start.

Browns' RB Nick Chubb is being placed on IR with an MCL injury, per Kevin Stefanski. #Steelers #NFL pic.twitter.com/nWXPizMzOC