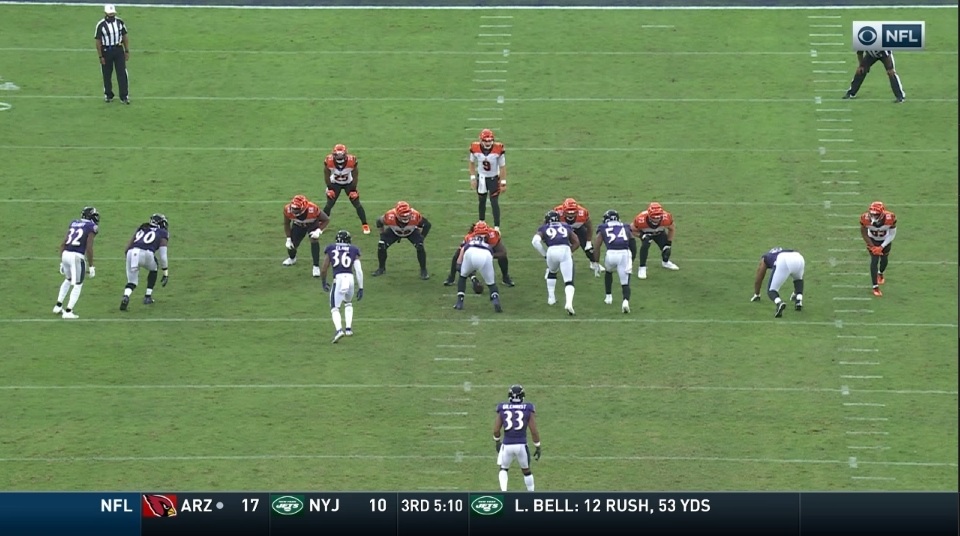 Cincinnati comes out with two receivers to each side and will motion the running back out wide to the right. Baltimore is in there Nickel grouping start in a Cover 1 look but rotate a safety deep into a Cover 2.

The Bengals spread things out on the first play of the game and to the left thy have Tee Higgins (85) on the outside and Tyler Boyd (83) in the slot. To the right they align tight end Drew Sample (89) in the tight slot, A.J. Green (18) in the slot and motion running back Joe Mixon (28) out wide to the right.

The Ravens have Jimmy Smith (22) over Higgins who runs a Go route and Marlon Humphrey (44) on Boyd who runs an Out route. The deep safety is Chuck Clark (36) and he will be joined by DeShon Elliott (32) rotating back into the Cover 2.  Marcus Peters (24) stays with the widest to the left (Mixon) and L.J. Fort (58) will shift out and line up over Green in the slot. Rookie LB Patrick Queen (48) is in the middle inside of Sample.

Mixon and Green are going to run shallow In routes with Sample running the deep In route behind Queen.  Queen is reading the number 2 receiver Green and jumps his shallow in route leaving the center of the field open.  Fort is too far away and the safeties are too deep to affect the throw giving Joe Burrow (9) and easy throw and a 14 yard gain to open the game.

Steelers Scenario – Diontae Johnson would be wide left with Juju Smith-Schuster in the slot left.  James Conner split wide right, James Washington in the slot and Eric Ebron being the recipient of the pass. Good play to put pressure on the linebackers early so they don’t concentrate on the run.

Cincinnati has Giovani Bernard (25) in the backfield and Green split to the right.  To the left the tight end Sample wide left, Higgins in the slot and Boyd in the tight slot.

The Ravens in their dime group have Marcus Gilchrist (33) in at the deep safety with Clark and Elliott in the box.  Peters is on Green, Humphrey is over the slot and Smith over Sample. Linebackers Matthew Judon (99) and Tyus Bowser (54) are mugging the A and B gaps to the right with Clark looking like a linebacker with Elliott on the running back.

At the snap the linebackers drop into coverage and both safeties blitz. Judon turns to the three receiver side and runs deep into the middle of the field while Bowser runs wide to get to the slot receiver.  Humphrey drops into the safety with Gilchrist. Boyd is going to run a deep Corner route while Sample and Higgins run shallow In routes.

Higgins against the linebacker Bowser is an easy mismatch and with Judon dropping deep the middle of the field is open. If Bowser stays inside of Higgins and cuts off his route then Burrow can hit Sample on the outside. Clark cuts off his pass rush and nearly makes an incredible play on the ball but Burrow makes a good read and gets the 11 yard gain.

Steelers Scenario – In this scenario Johnson is split to the right, with Smith-Schuster in the tight slot and Washington in the slot. Ben Roethlisberger has been great this year against the blitz so this should be right in his wheelhouse to find this mismatch and hit Washington or Ebron wide left for a good gain.

The Bengals go for it on fourth down and have two receivers to the left in the slot Alex Erickson (12) and Mixon and a receiver to the right that I believe is Higgins running a Go route.  Sample is the inline tight end to the right with WR Auden Tate (19) outside on the wing.  Baltimore chooses to go with Cover 0 with Man coverage all around and no deep safety.

The routes to focus on is the combination of Erickson and Mixon.  Erickson has Smith on him and Mixon has rookie Malik Harrison (40). With no safety help Smith want to get a jam on Erickson and he does but in this case it helps Erickson.  His role is to run a slant and rub Harrison to make it difficult for him to stay with Mixon who is going to release behind Erickson and to the outside and run a Go route.

This leaves Harrison trying to play catch up and he does pretty well to close the gap but Burrow throws it to the outside shoulder away from the defender for a 19 yard gain.

Steelers Scenario – I’m going to use Smith-Schuster in the Erickson role to have a bigger body for the linebacker to go around. Use Chase Claypool as the receiver wide right if Roethlisberger prefers the one on one on the outside.  Conner would be able to run this route but if you’re feeling daring and want a little more speed you can use McFarland but that might give it away in a short yardage situation.