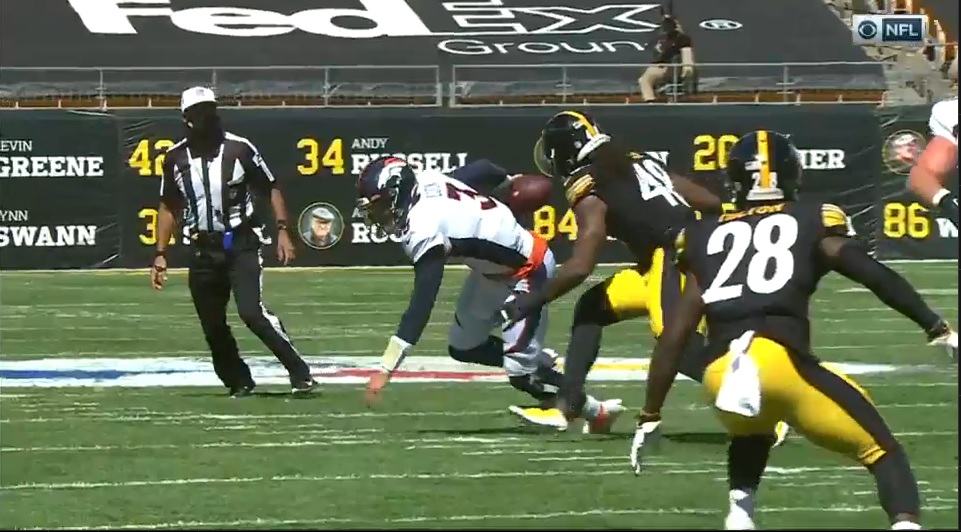 It’s not lip service when the Pittsburgh Steelers claim they’ll blitz anyone. They back up that kind of talk. And opposing offenses are finding that out. The Steelers recorded seven sacks in Sunday’s win over the Broncos. Those didn’t just come from the front four. Mike Hilton had one, giving him two in as many weeks. And Terrell Edmunds put the nail in the coffin, a critical fourth down sack to help preserve victory.

Speaking to reporters after the game, Mike Tomlin said the goal was the same this week as last. Pressure the quarterback.

“We’re capable of really bringing everybody,” Tomlin said in a Zoom call. “Except the field corner. That’s our philosophical approach. We’re a blitz group. It’s tough to bring the field corner because of the distance he plays from. But anybody else is capable of coming and that’s the code that we live by.”

Hilton blitzed nine times last week and probably matched that number again Saturday. Vince Williams earned a sack in the opener and Devin Bush nearly got home against the Broncos. Under Keith Butler, the Steelers have been among the most aggressive defenses but they’ve turned the dial to 11 this year.

Edmunds sack Sunday was particularly crucial. Denver faced a 4th and 2 down five late in the fourth quarter. The Steelers bluffed Mike Hilton blitzing from the opposite side, leaving Edmunds with a free path to the quarterback.

Though that aggressive nature wins more often than it loses, it does stress the Steelers’ secondary. Today, that group didn’t make all the plays and too often, were flagged by the officials.

But as Tomlin notes, don’t expect the Steelers to change their mentality anytime soon.

Pittsburgh will face a Houston Texans team in Week 3 that has a mobile QB in Deshaun Watson but a relatively weak offensive line. Watson was sacked four times in the opener against Kansas City and is facing plenty of pressure against Baltimore as I write this. Expect the Steelers to bring plenty of pressure for the third straight week.