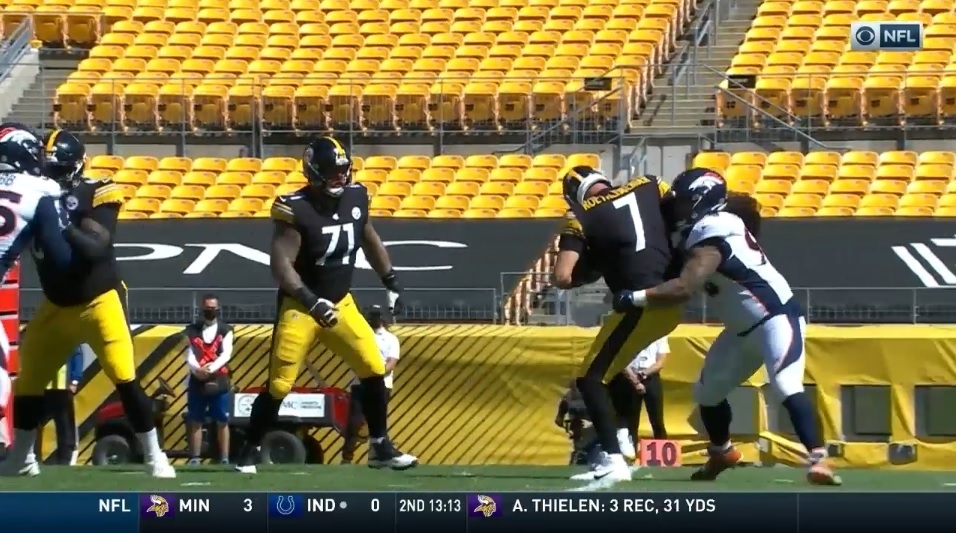 Breaking down the lone sack the Pittsburgh Steelers allowed in their Week Two victory over the Denver Broncos.

We already touched on this one earlier in the week analyzing the team’s abysmal RB/TE screen game. Steelers are running a middle screen to TE Eric Ebron. Goal is for him to engage the LOLB then shed it and turn to the QB. But Ebron’s never able to come off the block, stuck to #97 Jeremiah Attaochu. Attaochu recognizes the screen and blankets Ebron and the screen immediately fails.

On the design of the screen, the Steelers line’s jumping down a gap as RT Chukwuma Okorafor releases to get ahead of the screen. NT Mike Purcell jumps outside as Feiler pinches down and Feiler’s not able to mirror him. Because Ebron is covered up, there’s nowhere for Roethlisberger to throw the football and he has to eat the play. A ten yard sack, turning 2nd 10 into 3rd and 18.

Really have to file this one down in the “Steelers’ screen game is a mess category.” The offense doesn’t sell these well enough. They try to motion Chase Claypool across the field for some eye candy but Denver ignores it. Until the Steelers starts actually using their motion as part of the play and not window dressing, defenses won’t respect it.

These screen plays that fall apart are sometimes hard to assign blame to because everything is just ugly. But Ebron’s gotta do a better job of selling the play and getting off the block, he’s stuck the entire time, while I will put half on this on Feiler for getting beat, even if the screen naturally invites pressure.

As I wrote previously, until the Steelers figure out some of their timing issues in the screen game, they’re not worth running. Of the six attempted RB/TE screens they’ve run this season, the *best* play has resulted in a two yard gain. Yikes.

Blame: Half on Ebron, half on Feiler

None for the second straight week. Rare feat for the o-line.