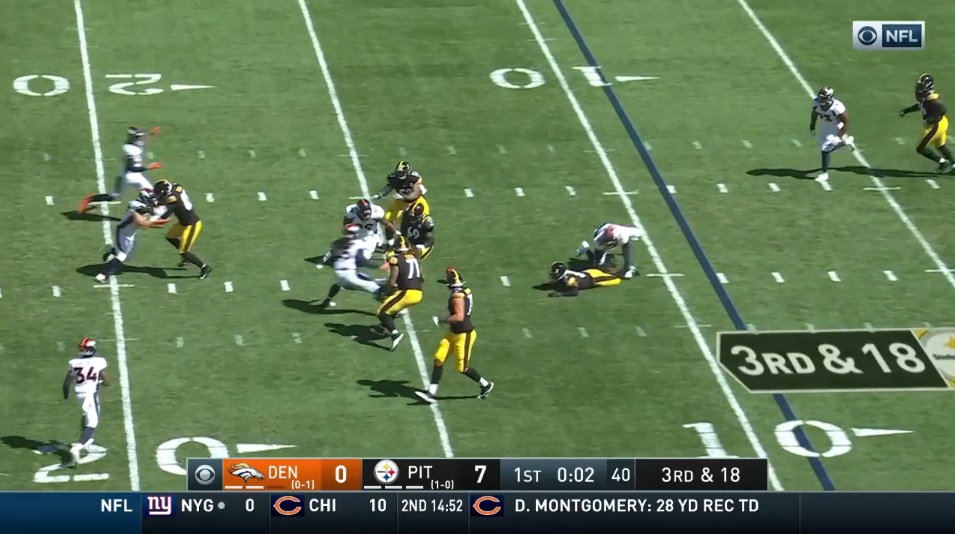 Through two weeks, the Pittsburgh Steelers’ offense has been good. Not perfect, a far cry from amazing, but a night and day difference from last season, when avoiding a first down interception felt like a cause for celebration. If there’s one area of the offense that feels very 2019, it’s the screen game. In the first two weeks, practically every screen designed for a tight end or running back has gone nowhere. And I mean that literally.

Against the Giants and Broncos, OC Randy Fichtner’s dialed up six screen plays for running backs or tight ends. On those six plays the Steelers are: 3 for 5, -1 yards, zero first downs, and one sack. Their “long” completion is two yards. Ugh.

So why have things been this bad? Let’s break down a few examples.

Here’s one from Sunday against Denver. Screen left to RB Benny Snell. But he bumps into the spiking ROLB, altering his path and disrupting the timing of the play. Snell spins off, runs backwards, and catches the ball eight yards behind the line of scrimmage. That’s not how it’s designed.

Even with a couple decent downfield blocks, #97 Jeremiah Attaochu is free and wrestles Snell down for a loss of four.

Another one from the Broncos game. TE middle screen right. Common screen Randy Fichtner’s called. Goal is for the TE to briefly engage the DE in his pass set, then let him go and turn to the QB. QB throws it behind the DE/OLB and the TE has blockers out in front.

But Ebron does a poor job being able to throw off the block and #97 stays with him, not rushing upfield once he realizes it’s a screen. Matt Feiler gives up the edge after jumping down inside as Pouncey releases and the whole play is ruined. Ebron’s taken away, there’s pressure, and Roethlisberger has to eat the sack.

This one against the Giants is the most laughable. Screen right to James Conner. Looks good initially but Stefen Wisniewski and Conner end up on the same level. Like a shutdown corner, Wisniewski blankets Conner and he’s unable to make the catch. Could’ve been a nice gain because this is sold well, the d-line rushing upfield, but yards left on the field.

Wisniewski probably has to release earlier here to get out in front of Conner and pick up the LB. He’s late and the play is incomplete. Timing and rhythm of this play is clearly off.

But the issue isn’t always on the skill player or even the linemen. Sometimes it’s scheme and the way these screens seem to be coached. Take this 3rd down screen to Jaylen Samuels against Denver. LT Alejandro Villanueva quickly releases and isn’t able to punch ROLB Bradley Chubb upfield. He’s now unblocked before the throw and tackles Samuels as he’s trying to make the catch. Samuels ultimately drops it but even if he caught it, Chubb is making the play and the screen is going nowhere.

There’s always a battle between wanting to sell the screen and getting your linemen in space to block. But if Villanueva can actually pass set and get Chubb up the arc before releasing upfield, he’ll be taken out of the play. The downside is that it’s much harder to get Villanueva out there as a blocker but if you don’t take care of Chubb and the first level defenders, Villanueva throwing a downfield block is moot.

As you see in the header photo and shown again below, the Steelers have four of their five linemen releasing out. That’s overkill. Like Chukwuma Okorafor, some guys have to stay in to sell pass and prevent the EDGE rushers from chasing the ball free.

This happened again versus the Giants. Even worse here. Either by design or a total breakdown in communication, #97 Dexter Lawrence is given a free path through the line. No one blocking him. And that sets off alarm bells in a linemen’s head. No pass set, a free path to the QB, that almost always means screen. So Lawrence stops, finds the running back, and acts as Jaylen Samuels parachute and drags him down.

If one of Maurkice Pouncey or Stefen Wisniewski were able to get Lawrence upfield, or at least get in his way, this is probably a positive play for the Steelers’ offense. Instead, a measly gain of one.

Suffice to say, every aspect of the RB/TE screen game has been a mess. From selling the pass, getting OTs to pass set to take away the EDGE rushers, to the receiver keeping himself clean and on schedule with the throw, it’s all been awful. Until they figure out the many, many problems, just remove it from the playbook.