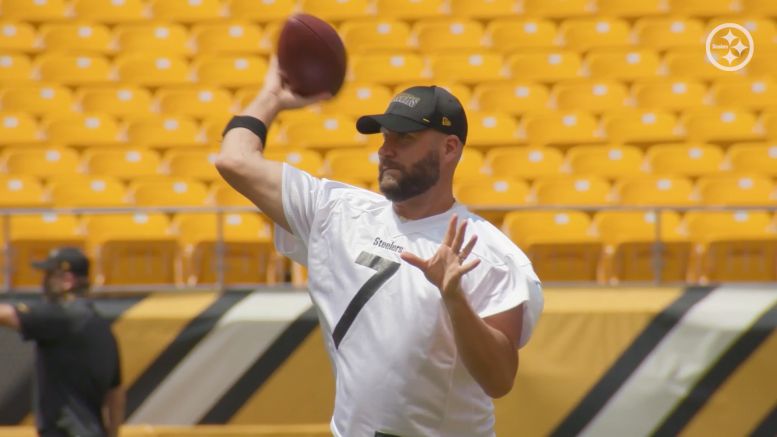 The Pittsburgh Steelers will wind down their 2020 training camp on Friday and then start preparing for their Week 1 road opener against the New York Giants. That means there’s just a few more camp practices for quarterback Ben Roethlisberger to get through with his surgically repaired arm. So far throughout training camp the reports on Roethlisberger’s arm have been exceptionally good and on Thursday team president Art Rooney II gave his thoughts on that topic during his pre-practice interview on Steelers Nation Radio.

“Well, I would say one thing we know now that I feel like we didn’t know in May and really didn’t know until we got into training camp here was really what level of strength does Ben been have in his arm,” Rooney said. “And I think we’re all comfortable in having watched him now in training camp for a number of weeks, his arm strength is maybe better than it was last year, but certainly it’s a Ben-level arm strength. And so, we’re happy about that.”

Roethlisberger having Ben-level arm strength is certainly encouraging to hear with the start of the 2020 regular season now almost one full week away. While the reports on Roethlisberger’s arm condition certainty seem positive and then some, Rooney did admit on Thursday that it would have been even better to see the team’s veteran quarterback get in more on-the-field practice this past offseason. That obviously didn’t happen due to the NFL offseason program being completely wiped out by the coronavirus pandemic.

“And it would have been nice to have a little more time for him to work with the receivers and the offense that he’s going into this season with, Rooney said on Thursday. “So, I think every team is going to start this season at a different place than we’ve started in past seasons. And what that’s gonna mean on the field, I don’t think anybody knows, but certainly what we’ve seen from Ben so far is very encouraging.”

Roethlisberger has talked quite a bit about his arm this offseason and on Thursday he did so again during an interview on SiriusXM NFL Radio and what he said was also quite encouraging with the team’s Week 1 game now right around the corner.

“Fast forward to today, I feel great,” Roethlisberger said on Thursday. “I haven’t had any pain in my elbow for the first time in, gosh, a long, long time. I don’t know that I necessarily feel tight or things like that, I just don’t feel that pain. I just don’t feel that every throw and things like that, where I have that issue. As a football guy, you rotate your wrist to throw to create that spiral, and that’s what those tendons, one of the big things they do. So, to not feel that now, it’s a blessing.

Basically, Roethlisberger is at least back to normal now and for all we know, maybe even better than normal. Steelers center Maurkice Pouncey said as much on Thursday during his Zoom call with the media.

“To watch his whole process, going through the surgery, to come back like this in Year 17, it’s been incredible to watch,” Pouncey said of Roethlisberger. “I know injuries are hard, especially at this age, but he has been out there rocking. He is a true leader; a true soldier and I really appreciate the type of player he is. That is normalcy, for sure.”