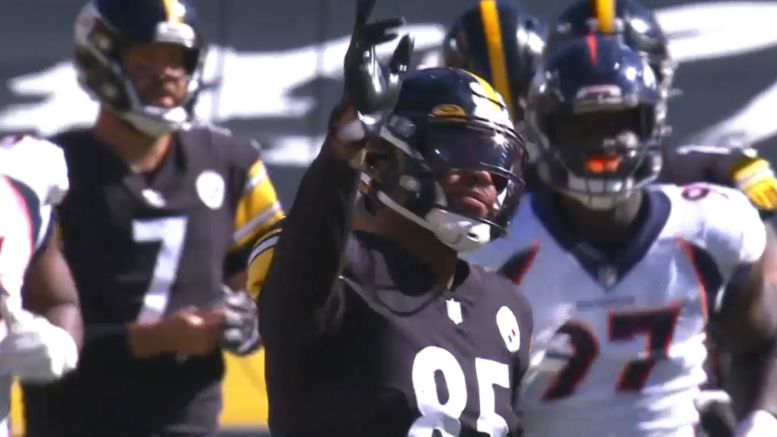 Through two games, Eric Ebron has been targeted seven times, catching four passes for 61 yards. Apparently, those on the outside were expecting to see more from the Pittsburgh Steelers’ latest tight end, even given the circumstances, up to this point in his time with the team.

Mike Tomlin wasn’t worried when asked about it during his Tuesday pre-game press conference. “It’s early. Keep watching. That’s all I can say to that”, he told reporters. “At this juncture of the season, you can ask a lot of those type of questions. A two-game body of work is not a big enough sample to assess. We are pleased with the development of Ebron and his role within our system, and time will tell that story as we proceed”.

The passing game is still very much developing, especially considering the change that has taken place in the past 12 months, but Ebron’s seven targets are fourth-most on the team behind their top three wide receivers, with Diontae Johnson and JuJu Smith-Schuster combining for 37 of Ben Roethlisberger’s 73 attempts—literally more than half. He also ranks fourth in yardage, and second in yards per reception.

The Steelers gave Ebron a two-year, $12 million contract in March. For his career, he has averaged 3.4 receptions for 38.3 yards per game. That’s not so radically far out of line with what he’s done so far. On Sunday, he caught three passes for 43 yards.

The former first-round pick’s best season came in 2018 with the Indianapolis Colts and Andrew Luck. That year, he caught 66 passes for 750 yards and 13 touchdowns. Outside of T.Y. Hilton, however, the Colts didn’t have much on offense that year. Nobody else had even 500 receiving yards.

The Steelers have a good chance of having at least five skill position players go for 500 or more receiving yards on the season, including Johnson, Smith-Schuster, James Washington, and Chase Claypool. There’s always the possibility of James Conner doing it as well if he stays healthy and is incorporated more into the passing game.

Will Ebron get worked into the passing game more as the season progresses? I have no doubt of that. But it will also be built around matchups. If his participation favors the offense more against a particular opponent in a given week, then he’ll play more. Against more unfavorable matchups, he will see fewer opportunities.