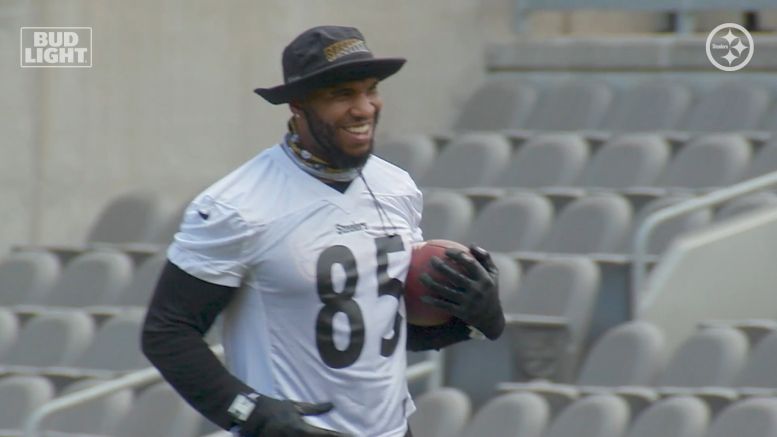 One thing the Pittsburgh Steelers always value—or at least try to—is character and personality. Even in free agency, when they bring a guy in, they want to make sure that he is going to mesh with their locker room and their culture. That doesn’t always work out, of course, but you’re never going to bat .1000.

With Eric Ebron, so far, so good it seems in terms of how he is integrating not just into the locker room, but the broader culture as a whole. In particular, he and head coach Mike Tomlin would seem to have taken a mutual liking to one another as the latter hovers over him during blocking drills.

Signed in free agency to be a big part of the offense, he has been working on learning the playbook and building chemistry and just generally getting familiar with what will be asked of him to do once they get on the field. And part of his desire to do whatever he can for the team is how Tomlin leads his men.

“He doesn’t act like a boss. He acts like he’s on the level of his players”, he told Pat Kirwan and Jim Miller on Thursday during an interview for SiriusXM Radio. “More respectfully, he just wants to get to know guys. He wants to bring the best out of guys. He wants to force situations in which guys can either succeed or fail, and he doesn’t sugarcoat anything”.

As far as Ebron is concerned, that would certainly seem to apply to the work he does with James Daniel on the blocking sled, something he recently acknowledged that he essentially hasn’t done since college. He said that the Detroit Lions had their tight ends hit some kind of heavy bag, but not these drills.

All the more reason for Tomlin to supervise his development as he works himself into the sort of blocker they will ask him to be, even if it is understood by all parties involved that his chief responsibility will be making plays as a receiver.

“He’s more straightforward than anything. He tries to figure out exactly who he has, who’s gonna help him win, and how they’re gonna help him win”, the tight end said of Tomlin, “and he utilizes it better than most people that I’ve seen”.

“I hope that me and Mike Tomlin continue to build the relationship that we have and we win a lot of games together”, he added, “because he’s someone that’s a joy to play for, and it’s always fun out there with him. You know, he’s a defensive coach, I make his life a little miserable, so it’s fun”.

It’s true that Tomlin has made a name for himself as a defensive coach, but at heart, he’s still a wide receiver who loves the big play, and he can relate to big personalities who think that they should be getting the ball all the time. Frankly, it’s not surprising that the two would resonate with one another.