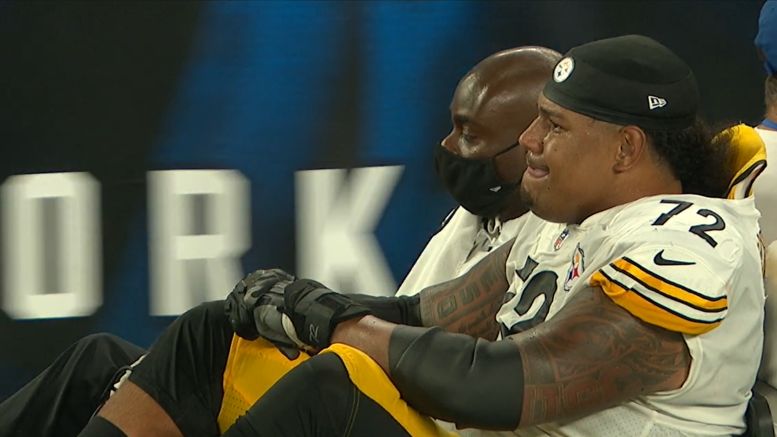 The Pittsburgh Steelers lost their right tackle, Zach Banner, just one game into his starting career after he suffered a torn ACL while playing in MetLife Stadium, home of the New York Giants. While the Giants were on the road Sunday, the New York Jets, who play in the same facility, hosted the San Francisco 49ers, who saw a number of players suffer injuries, including Nick Bosa, who also suffered a torn ACL.

Following Sunday’s game, several 49ers, and their head coach, Kyle Shanahan, called the field conditions into question, suggesting that the stadium turf contributed to the numerous injuries that they suffered, with Shanahan calling the field “sticky”. Arik Armstead, another player who was injured, called it “trash” and urged the NFL to fix it.

There is particular concern for San Francisco because they will play there again on Sunday when the Giants host them. Dianna Russini of ESPN reported via Twitter that several players on the team said they were “afraid and anxious about playing on the turf again”.

The league verified that an independent field inspector completed an inspection of the field on September 12 and found it to be in compliance with league policies. Clubs must also certify 72 hours before each home game that the field conditions are in compliance.

According to Pro Football Talk, neither the Giants nor the Jets (even though they also had several players injured) had complaints about the field conditions—and neither did the Steelers, even after losing Banner to a torn ACL.

A little less than half of the 32 teams in the NFL play their home games on turf rather than natural grass. The Bengals are the only team in the AFC North to use turf. They already played on turf in Week One, and will do so again against the Cowboys and the Bills later in the year.

Defensive tackle Tyson Alualu said yesterday, “any time you play on turf, you always kind of feel a little different after games, as opposed to playing on grass. I think there is a difference. I know when I was out there Week One, I kind of tweaked by ankle a little bit. It wasn’t too bad, but that’s part of playing on turf”.

The Steelers have an indoor turf practice field that they use when inclement weather prevents them from practicing outdoors, but Mike Tomlin tries to avoid using it as much as possible. The NFL is not unfamiliar with poor field conditions, nor are the Steelers. Shaun Suisham suffered a career-ending injury playing on the awful Canton field for the Hall of Fame game several years ago.

Did the MetLife turf contribute to Banner’s torn ACL? Well, someone who understands the mechanics better than me would have to weigh in on that. But it’s fair to say that it would be patently unfair to expect any team to play on a poorly-kept field, whether grass or turf.