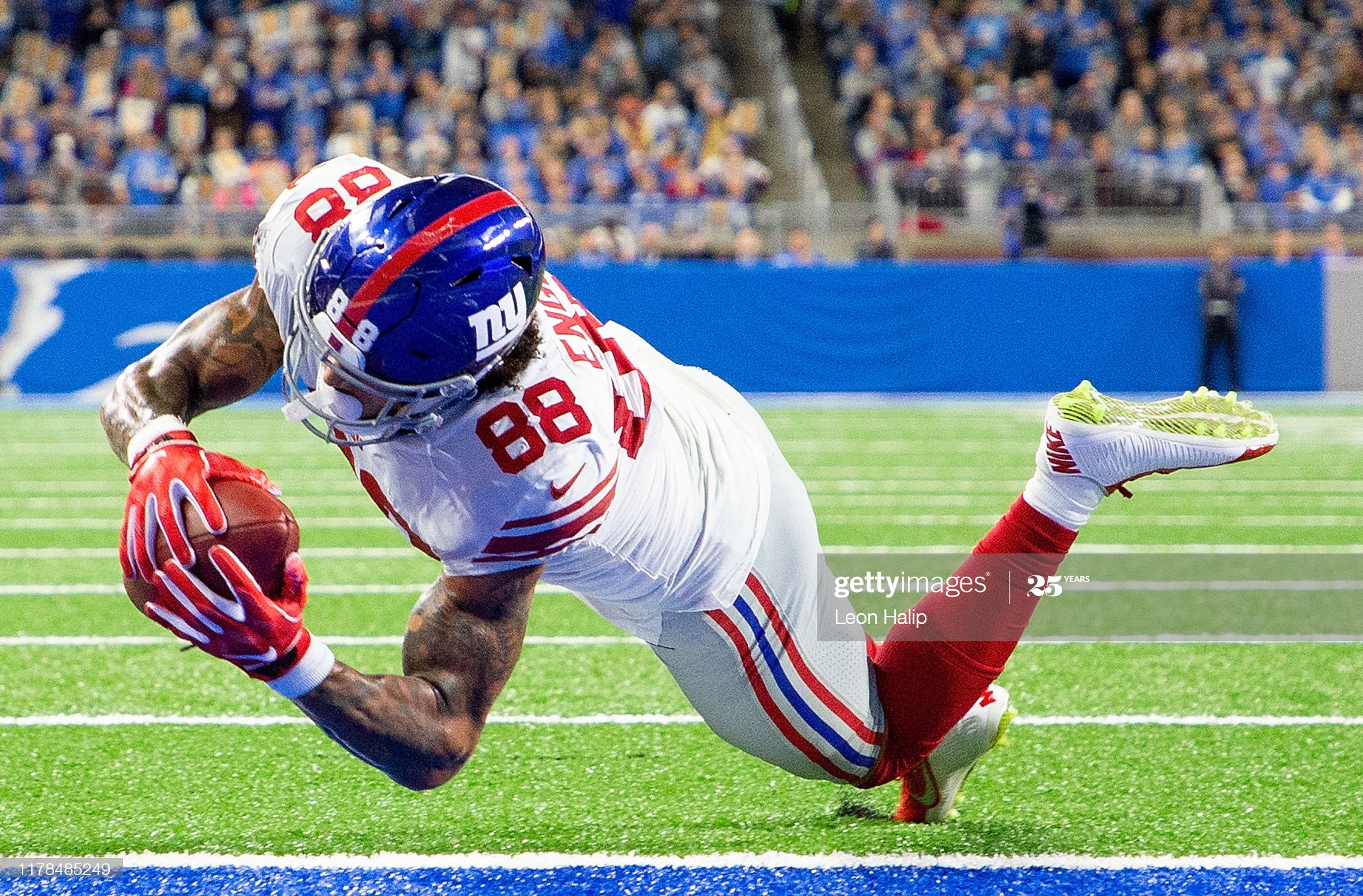 Football is BACK, folks! Can you believe it? After the strange and unusual offseason, it’s finally time to talk real-life football. Throughout the Pittsburgh Steelers season, I will be doing a weekly piece on an intriguing matchup to watch for each game. The focus will be on choosing an important battle for the upcoming game and give you some background information that could be something to keep an eye on come game time.  For example, it could focus on key players on each team that will be going head to head or how a defense will try to stop a specific player. Let’s get into it.

While teams normally don’t go too deep into their respective playbooks during the preseason, not having one certainly leaves the Giants offense as a bit of a mystery going into the 2020 season. With new head coach Joe Judge at the helm and former-Cowboys Head Coach, Jason Garrett, now calling the offensive plays in East Rutherford, the Giants are looking to have brand new offense for the 2nd-year quarterback, Daniel Jones.

This begs to question how would the Steelers prepare to defend an offense with a brand new offensive coordinator and no historical film to go off of? The answer lies in studying Garrett’s offense with the Cowboys as Judge described during a media press conference, “Schematically, the easiest way to describe it right now to the outside world is it’s going to be similarly based off of what [Jason Garrett] has done in Dallas over the last 10 or so years. There’s going to be similarities with that, but it’s got to be catered to the players we have on our roster.”

A lot will be written pregame about the Steelers outside linebackers matching up with the Giants tackles, Cameron Fleming and rookie Andrew Thomas. To put it bluntly, expect domination from the TJ Watt and Bud Dupree in that department. With that being such an obvious matchup to watch I wanted to go a different direction with this article and really focus on who I think is going to be the X-Factor in Garrett’s offense, Evan Engram. Garrett runs what is referred to as the “Air Coryell” offense. The offense is named after Don Coryell, the head coach of the San Diego Chargers in the late-’70s to mid-’80s when guys like Dan Fouts and Kellen Winslow were thriving in this offense. It is designed to spread out a defense vertically as opposed to horizontally, like the West Coast Offense.

Fast-forward to modern-day, it’s impossible not to think about the Cowboys offense in the last decade, without thinking of what Jason Witten was able to do from the tight end position. Now switch out Witten with Evan Engram, the 6’3” 240 pound athlete that ran a 4.42 40 at the combine, you may have something there.

It’s no secret Garrett loved utilizing Witten, as he received 80 or more targets every year he played under Garrett, including multiple 120+ target seasons despite having a legitimate #1 receiver and a stout rushing attack many of those years. Due to injuries, Engram has only been targeted 132 times in the past two seasons after being targeted 115 in his rookie year.

All signs are pointing to Engram being a massive part of this Giants offense this year which is why I’m hoping the Steelers highlight him when drawing up their coverages. While the Steelers ranked in the top 5 last year in terms of receiving yards surrendered to tight ends, they also were tied, ironically with the Giants, for 6th worst in the league for giving up 8 touchdowns to tight ends.

Thanks again to the lack of preseason games we are left with much speculation in terms of how the Steelers defense will deploy themselves in clear passing situations. While we broke down Vince Williams’ coverage ability and saw it isn’t as lacking as originally perceived, he’s clearly not the guy for the job when asking to cover a mismatch tight end like Engram. Other than him, it’s hard to rule out any of the likes of Devin Bush, Ulysees Gilbert III, Terrell Edmunds, or the freshly switched hybrid-linebacker, Marcus Allen to draw some coverage reps against Engram.

In the Air Coryell offense, Garrett will be vertically attacking the seams consistently with the likes of Engram, similarly to how he did with Witten for over a decade. The Steelers defense traditionally has struggled down the seams for a myriad of reasons over the years from poor communication, inexperience, or just plain lack of talent in key positions.

Here’s a great example in week 2 of last year where the Steelers are in Cover 1. They are late to react to the presnap motion from the Seahawks and in only his 2nd NFL game you can see the smoke coming out of Devin Bush’s ears at the snap of the ball. That hesitation is just enough for Russell Wilson to sneak the ball over Bush’s outstretched arms for a touchdown. Russell Wilson and Will Dissly connected for a second touchdown on a very similar looking play later in this game, again over Devin Bush.

In the red zone, tight ends over the middle of the field have also been a thorn in the Steelers side in past years. Likewise, Daniel Jones loves throwing to the middle of the field. Last season he completed 107 of 134 passes for 960 yards with four touchdowns and one interception on routes run between the hash marks inside of 10 yards. On deep balls between the numbers, Jones produced his highest-passer rating of any route with a mark of 143.8.

Circling back, Bush had about a good of a year as one could ask out of a rookie linebacker. Going into year 2, especially with Mark Barron gone, he’s going to be asked to have more coverage responsibilities. While he hasn’t been awful by any means there’s certainly a little room for concern with his ability to cover tight ends 1-on-1. Here’s an example against the Colts tight end Jack Doyle. Bush is man up against Doyle and bites on the shake route leaving him wide open for the touchdown across the middle.

While not an identical route, here’s Engram running a variation of a whip route in the middle of the field against a linebacker. You can see how patient he is setting up the linebacker to bite on his outside move before exploding inside.  Then, he can make you pay after the catch as well.

This all leads to the question if Bush is struggling against a much less athletic tight end such as Jack Doyle, will he be able to step up to the task if asked to cover Engram 1-on-1? We shall see on Monday night.

What Engram Does Well

Most tight ends serve as great red-zone targets for their offense, Engram is no different. Often times, inside the 10, the Giants would utilize Engram on play-action rollouts that left him open in the flat as seen below.

This means that whoever is responsible for Engram around the goalline has to have great eye discipline to not get fooled by any play-action fakes in that part of the field.

Engram also utilizes his speed and burst in the open field. His tape is littered with him taking underneath drags or the hank route as you see below and outrunning the angles of the defenders to get an easy first down. He makes it look easy thanks to his athleticism, but most NFL tight ends are getting tackled before the sticks here.

Due to this burst and speed, you have to be careful in the open field. He’ll make you pay with his 4.4 speed if you miss just one tackle. The Steelers have to be good tacklers in space and minimize his YAC ability.

How Engram Could Be Used In Garrett’s Offense

While the above plays are great, I really wanted to take a dive into old Jason Witten film to give us a look into how Engram could be utilized more in the vertical passing game in Garrett’s offense.

This is one of the routes Witten perfected over the years, the stick nod. If you’ve ever watched a Cowboys game circa the early 2010’s you can just about bet you saw Witten getting wide open across the middle with this route at some point. The stick nod is a double move where you fake to the outside before cutting towards the middle of the field, almost like an out and up from the slot. It’s especially effective against 2-high coverages where you are attacking the soft spot between the 2 safeties in the middle of the field.

Here’s another example of getting Witten vertical, this time down the seam against the Steelers in 2012. The play-action movement freezes almost everyone at the 2nd-level and Witten is able to sneak right down the hash for the easy score.

With the success of Dallas’ running game in the past decade, Garrett was able to rely heavily on play-action fakes to open up his tight ends. It will be interesting to see if the Giants can open enough holes in the Steelers DL on Monday to have a successful running game or if they’ll be deemed as one-dimensional making the play-action fakes much less effective.

All in all, I’m really excited about the chess match between Jason Garrett and Steelers Defensive Coordinator Keith Butler this week. Keep an eye on how Garrett tries to manipulate the Steelers backers and safeties to get Engram open and allow for easy, quick throws for his young quarterback. On the Steelers side of things, it’s going to offer a great early test for the young backers and safeties in terms of communication and coverage abilities.