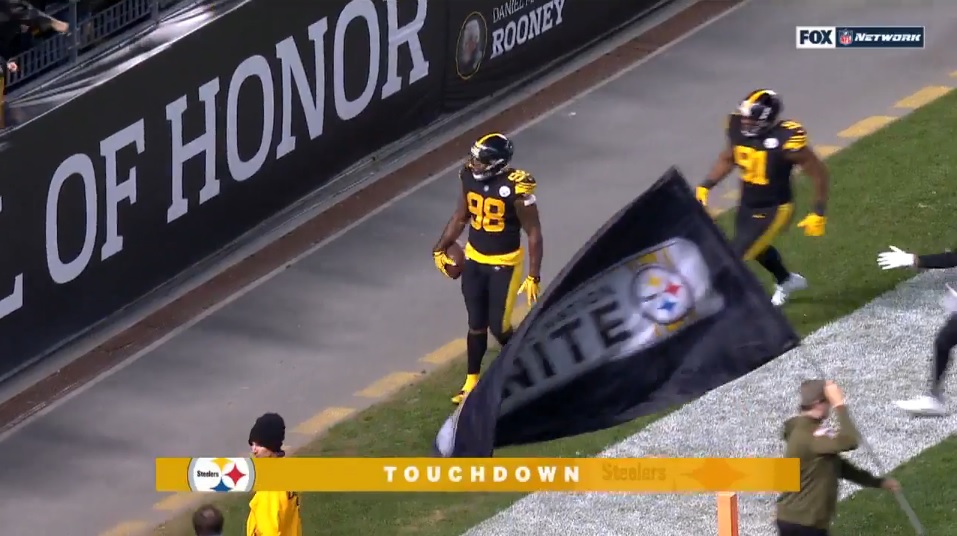 With Mark Barron gone, Vince Williams is certain to have an expanded role in 2020. Something similar to his snap count from 2017-2018, though his exact role is unclear. Our Tom Mead did a great job evaluating his overall game and I echo basically everything he wrote in his article.

But I wanted to focus on his coverage today. Most fans understand his value against the run and as a blitzer. The common knock on Williams is his ability to go backwards. To cover, to play in sub-package, to move in space.

So let’s take a deep dive into the numbers and then the tape.

What The Numbers Say

Those are obviously good numbers though clearly a small sample size. Part of that is our target methodology, we’re much more strict in what we consider a target than say, PFF. But is part of it how often Williams is used in coverage? After all, we had Mark Barron targeted 28 times in 2019.

We can use our charting to find that out info out, too.

No question Williams has a significantly lower coverage rate compared to those others. Over 10% of difference. One reason why his target numbers are smaller is simply because he’s in coverage less.

That leaves a chicken or egg question. Does Williams blitz so much more because he’s just an effective blitzer or because the team is masking his coverage ability?

Before we get into the tape of him in coverage, it’s worth saying the obvious. Williams is an excellent blitzer, one of the best off-ball blitzing linebackers in football, and Keith Butler has done a solid job designing schemes to get him free up the B gap. He has 17.5 sacks and likely to move into the top-five in Steelers’ history for off-ball LBs

Ok, let’s get into the tape.

Williams’ football IQ shows in coverage and makes up for a lack of elite athletic tools. He has a good understanding of route concepts, specifically the RB route tree, and is patient in not guessing and cheating on routes. Here’s a great example Week 1 of 2019 against the Patriots. Compare Williams against the Pats and Devin Bush later in the year versus the Colts. Williams is more patient and does a better job reading the hip, letting the receiver declare his route, while Bush is fooled by the TE’s double-move and gives up the inside release, where he has no help.

He processes route combinations well and is able to match in zone coverage. Here, the Ravens are running a smash concept (curl/corner). As #2 peels off to the corner, Williams anticipates #1 coming on the shallow cross (now the “new #2”) so Williams comes off the route to pick up the underneath receiver.

It’s not just underneath zone either. Williams shows the ability to low-wall or carry receivers down the seam when the Steelers are in two high coverages. Again, compare him to Bush in Week 2 against Seattle. Watch Williams carry the seam in a 2×2 look versus Bush. Williams doesn’t take a false step in and is able to stay in the TE’s hip pocket. Bush steps down, trails, and gives up the TD.

Not picking on Bush here, he was a rookie learning (in the second week of the season, no less). But the point is to show athletic tools aren’t the only element to coverage. Technique is critical and Williams shows it.

He’s also one of the more physical Steelers’ in zone coverage. Too often, the defense allows free releases and lacks reroutes in coverage but Williams shows the ability to bump receivers off track and he’s physical on running backs as they release out of the backfield.

Returning to the numbers for a brief moment, it’s obvious Williams hasn’t created many splash plays in coverage, five pass breakups and two INTs over the last three years. Of off-ball LBs with at least 35 starts (Williams has 38) since 2017, only four have five or fewer pass breakups: Dont’a Hightower, Anthony Hitchens, Shaq Thompson, and Williams.

And that’s not a surprise. Williams is physical but focuses on making the tackle, not so much going after the ball. Because he’s used more often as a zone/hook defender, QBs aren’t often throwing in his wheelhouse either.

But there are other negatives too. When acting as a hook defender, he can get aggressive on underneath routes, getting him out of position in his zone window and opening up routes behind him. Great example here.

Is Williams going to make a play on the ball? Given the loft, probably not. But it’s the principle of the matter and maybe Williams staying in his zone and getting depth makes the QB move to his next progression. Context matters too. In that clip versus LA, the Steelers were leading 24-3 in the fourth quarter. Let the QB hit the checkdown and nickel and dime their way downfield. Keep the ball in front of you in those situations.

And another versus the Bengals. He doesn’t have flat responsibility here but he floats that way and it opens the deep dig route behind him. Pass is dropped but Williams widening helped create the throwing lane.

Here’s my quick scouting report on Williams in coverage.

+ Good zone processor, feel for route combinations and ability to match routes mid-play
+ Shows patience for RB/receiver to declare route, doesn’t guess, and does nice job of reading receiver’s hip and not be fooled by eye/head fakes
+ Physical at LOS, able to reroute and jam running backs at the LOS
+ Down-to-down consistency, low variance in coverage, takes good angles to the ball, plays to upfield shoulder, and wraps up after the catch
– Lacks big plays in coverage, goes for wrap-up more often than the takeaway
– Can get too aggressive as underneath hook defender and drive on routes outside his zone, opening windows behind him

There’s an overall consistency to his game that you have to appreciate. Williams might not be much more than “solid” and “dependable” but that’s not a bad thing. Coverage traits like those are hard to find. Too many guys don’t have either the athletic or mental traits to succeed or are just too high variance, too up-and-down to be trusted in coverage. Finding negative plays of Williams are far and few between and even his worst ones aren’t *that* bad, all things considered. You won’t find any of him being a flat out liability.

When you pair Williams with an elite athlete like Devin Bush, you have an impressive nickel defense. If you had two Vince Williams and lacked that uber-athlete that’s a better matchup for the top receiving backs or most athletic tight ends, your defense could run into problems. That’s why the Steelers made such an aggressive move to trade up for Bush. You need one of those guys. But Williams is a great compliment and his coverage woes are far overblown.