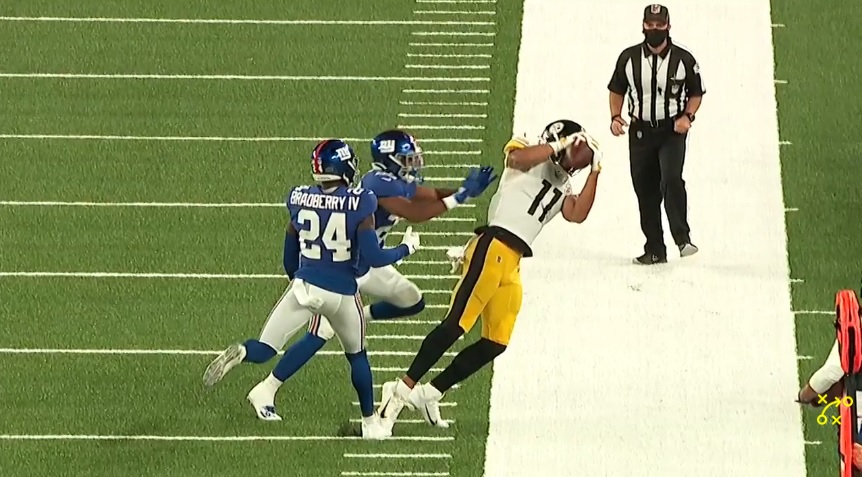 If you follow the Steelers in any capacity you would’ve had to live under a rock to not hear at least some rumblings of the excitement Chase Claypool caused during training camp this year. On a daily basis either from the practice pool reports written by the limited media members that attended camp practices or the zoom interviews featuring players and coaches, Claypool was seemingly always mentioned in some capacity. I think it’s safe to say Claypool has to be one of the most hyped rookies coming out of camp in Steelers history.

Quarterback Ben Roethlisberger even said, “Well, I always get caught trying to spread too much praise to rookies because I want them to sneak up on other people, but it doesn’t look like Chase [Claypool] is going to be able to sneak up on anybody right now because people are talking about him and deservedly so.” It was tough hearing reports and comments being thrown around about Claypool so frequently without being able to see him in any live-action situations during the game-less preseason. Monday night against the Giants, Claypool finally was able to make his NFL-debut and he served up some glimpses as to why his teammates were gushing about him. Let’s dive into the tape and see how he fared in his first snaps as a pro.

Claypool accumulated 19 offensive snaps, 2 catches for 39 yards, and 1 rush for 8 yards against the Giants. Of those 19 snaps, he lined up on the outside 14 times (74%) and inside 5 times (26%). Four of those 5 times he lined up in the slot, he was the point man in a bunch set, often being joined by a motioning receiver creating a twins bunch look.

His first route occurred on a 3 & 5 during the Steelers’ first drive. He lined up in the slot as Diontae Johnson was brought into motion to make it twins bunch. This likely should have been Claypool’s 1st NFL catch as he runs a drag across the formation. Quarterback, Ben Roethlisberger, looks like he pumps it Claypool’s way, but I believe he’s actually trying to squeeze it into tight end, Eric Ebron, across the middle of the field. He wisely pulls it down. It would have been interesting had Roethlisberger thrown the drag as we would have gotten an early glimpse of Claypool’s playmaking ability.  If he was able to make the linebacker miss, he would have had a first down and a lot of green grass to work with. Instead, Roethlisberger tries to check it down to James Conner which resulted in a fumble.

Instead, Claypool’s first NFL catch came later in the 1st quarter. You can see on the all-22 angle that he gets a solid release with a simple foot fire. One thing to note on this is the really widens to get that release. You can see at the snap he’s only about a yard under the numbers. Then, by the time Roethlisberger releases the ball, he’s about ¾ of the way to the sideline. This makes it an extremely hard throw for your quarterback as you’re not giving him any wiggle room on your outside shoulder.

Luckily, Roethlisberger drops this one in the bucket and while getting away with a little push off, Claypool shows off his body control with a great contested catch against the sideline. It’s an exciting play to me because it’s the first time we fans truly got to see the trust Big Ben has in the young rookie.

Ideally, in the last clip, you’d like to see Claypool use his speed and stack the cornerback. You can see him do just that in the clip below.  He has another solid release where he doesn’t allow the cornerback to get hands-on. He applies pressure to the corner by taking a step at him, getting square so he still has a 2-way-go, then exploding inside. Once he releases, he stems and stacks the cornerback before breaking to the post. You can see how deeper routes are great for him as he gets to show off some of his long speed where his strides can help him gain ground quickly.

Here’s another easy release by Claypool. If you’re sensing a theme here, you’re probably right.  This part of his game came very easily to him in week 1. It’s something I want to keep an eye on as the season progresses because the Giants corners were not world-beaters. He’s not doing any too crazy at the line of scrimmage to beat the press, but it’s working. He again applies pressure to the corner then gets physical by using his hands to swipe past him.

This rep is probably the worst of the game for Claypool. It happened the play following his big catch so it may be attributed to his excitement and adrenaline. The Steelers again motion into bunch with Claypool being the point man in the slot. He initially looks like he misses a chip on the EDGE which then throws him off balance. Instead of resetting his feet and getting square to block the DB he lunges and goes in out of control allowing the defender to run right past him. That defender is then the first to make contact with Benny Snell. Granted, this play was not originally designed to go outside, but you’d like to see Claypool be able to make that block.

By no means do I think the above clip is who Claypool is as a blocker. He regularly shows great want to in the blocking game, so much so that anytime the Steelers went into 22 personnel (2 runningbacks + 2 tight ends) on Monday Claypool was the lone wide receiver on the field. In years past Pittsburgh usually uses their designated special team’s specialists in this spot i.e. Darrius Heyward-Bey, Johnny Holton, etc.

This year, Claypool is the closest thing to that on the roster as he accumulated 14 additional snaps on special teams against the Giants. With Claypool being a more legitimate receiving threat than the latter it wouldn’t surprise me to see 1-2 play-action deep shots to Claypool out of 22 personnel at some point during the season. The clip below makes it easy to see why he’s in this spot and is a great example of what he brings to the table with blocking as he bullies the cornerback 15 yards down the field.

Claypool’s 2nd catch was pretty cut and dry. It occurred on a 3rd & 21 from the Giants 29. Steelers go trips to the left with Claypool at the WR2 spot. He runs a whip route and with the defense dropping into a deep zone it allows him to be wide open underneath. He catches it cleanly, then the defense converges, stopping him well short of the sticks. What you can see here at the end of the run, is how much of a load he is. At 6’4” 238 lbs, he’s a wide receiver in the body of a tight end and it shows with how the defenders all bounce off of him at the end of the run.

The last thing we’ll talk about with Claypool is his jet sweep. The last drive for the Steelers where they successfully ran out the clock was almost exclusively in 22 personnel with Claypool. A few plays prior to the jet sweep, as you can see in the first half of the clip below, the Steelers set it up with a presnap jet motion from Claypool. Then, to finish out the game on 4 & 1 they brought it back and actually handed it off to him. Per Next Gen Stats, Claypool was the fastest Steelers’ ball carrier from week 1 hitting 19.37 mph on the play. An overlooked factor of this play is the slide at the end.

Now, while it wasn’t necessarily needed to effectively run out the clock the fact that the rookie wideout already had it in his head that he didn’t want to go out of bounds and stop the clock in this situation is great. Showing off his football IQ early.

While not an overly exciting debut from Claypool, outside of the big catch and the jet sweep that sealed the game, there were some details to his game that impressed. After going through his snaps it was easy to see why PFF had him as the highest-graded rookie after week one with his score of 90.2. Other than the one poor block rep, it was an overall very solid performance from Claypool. One that made you calling to see more opportunities for him as the season matures.