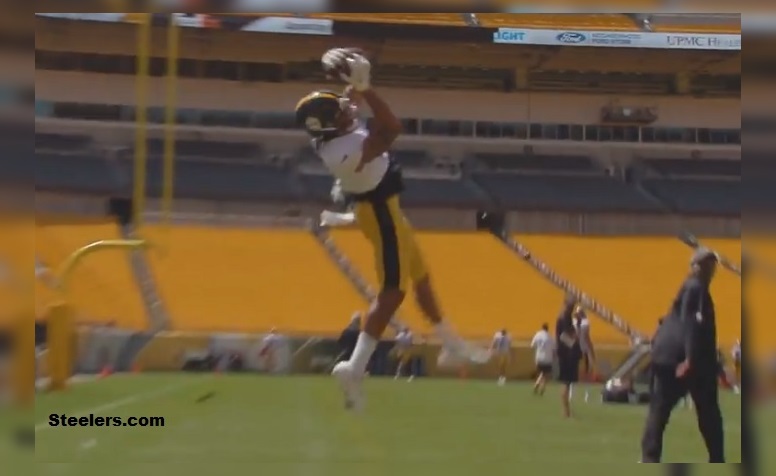 To hear the Pittsburgh Steelers coaches talk and to read the various blurbs that come out of training camp almost daily, rookie wide receiver Chase Claypool has been impressive to date during the sessions. On Thursday, however, it was time for Steelers quarterback Ben Roethlisberger to comment on the team’s first draft pick this year when he met the media ahead of the team’s practice.

“Well, I always get caught trying to spread too much praise to rookies because I want them to sneak up on other people, but it doesn’t look like Chase is going to be able to sneak up on anybody right now because people are talking about him and deservedly so,” Roethlisberger said of Claypool. “He’s just making plays. I think the plays that he’s making are impressive, but I think to me, the more impressive is that he doesn’t ask a lot of questions, which means he knows this stuff.

“I can change a play with a hand signal or call a different play at the line of scrimmage and I always check with him, like, ‘Are you good?’ And he’s like, ‘I got it.’ And so, I think that is just very, very impressive from a quarterback perspective that as much as we’ve thrown at him, he’s able to digest it.”

Roethlisberger did go on to caution that Claypool hasn’t been perfect in practices to date but did follow that up with more positivity about the Notre Dame product.

“And not saying he doesn’t make a mistake, but when he makes a mistake, he’s not making the same mistake twice, Roethlisberger said. “So, I just think that’s really impressive.”

Impressive indeed and especially considering that Claypool, like every other player in the NFL this year, didn’t have the benefit of any offseason practices to help with his transition to the NFL and the learning of a new offense.

To date, the training camp blurbs and comments on Claypool have been so glowing that it’s hard to fathom him not getting some sort of offensive playing time right out of the chute in the team’s Week 1 Monday night road game against the New York Giants. Will that Week 1 offensive playing time be more than just red zone work? We’ll see as Claypool is also expected to be a special teams contributor right out if the chute as well and especially as a gunner on the punt coverage team.

Even if Claypool only gets red zone work to start the 2020 season, that’s an area the Steelers offense certainly could use his production in. Claypool showed during his college career that he was a handful to cover inside the red zone and it’s sounding like that’s carrying over at the NFL level as well.