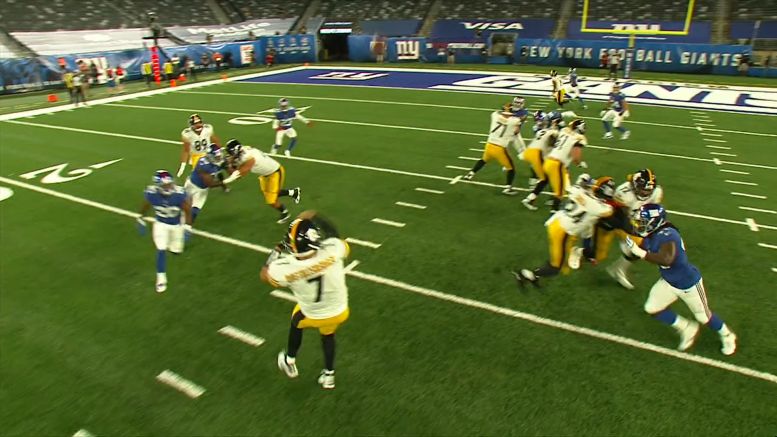 The fact that he only played in six quarters last season is a pretty hefty caveat, but nevertheless, Ben Roethlisberger’s 13th official pass attempt of the season, with 9:07 to go in the second quarter of the 2020 season opener, was somewhat momentous, in that it ended the longest drought of his career.

That pass resulted in a 10-yard touchdown to JuJu Smith-Schuster. It was the first touchdown pass that he had thrown since December 30, 2018, in the 2018 regular season finale, finding Smith-Schuster for an 11-yard score, which at the time tied the game at 10-10 (this game would have been tied 10-10 had it not been for a missed Chris Boswell extra point).

That is 625 days between Roethlisberger’s 363rd career touchdown pass in the regular season and his 364th. He only played in two games during the 2019 season, limited to just two quarters of action in Week Two before finally succumbing to three torn tendons in his throwing arm, but it’s rare that he goes even six quarters without throwing a touchdown.

Roethlisberger attempted 16 passes after his final touchdown of the 2018 season. He attempted 62 passes during the 2019 season. He threw 12 passes before scoring his first of the 2020 season. Overall, that is only 90 passes between touchdowns, but spans about 21 months.

And that wasn’t it. His second touchdown of the season would come only a short time later, at the end of the same quarter, just seven seconds before halftime. While it took a fantastic individual effort by James Washington at the goal line, the play design put the wide receiver into open space.

And on that note, it was Roethlisberger’s first multi-touchdown game since Week 16 of the 2018 season, during which he threw three touchdowns in a late losing effort to the New Orleans Saints, a defeat that ultimately cost them a spot in the playoffs. He would add a second touchdown pass to Smith-Schuster before the night was through, seemingly making up for lost time.

In the meantime, after well over a year since his last touchdown pass, he finally, for the final time, tied Eli Manning in career touchdown passes with 366. With Manning obviously retired, his next will leave him permanently ahead of one of the two quarterbacks who were drafted ahead of him back in 2004.