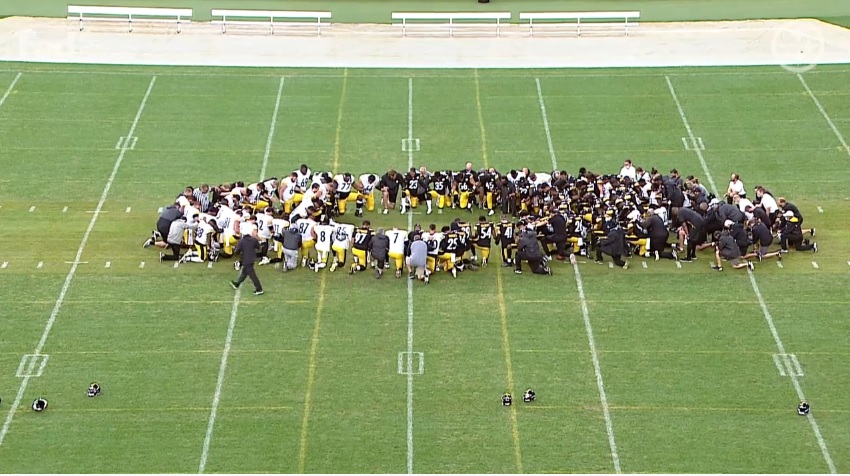 In a powerful moment prior to tonight’s practice, Mike Tomlin gave a speech speaking out against racial injustice and the importance for unity and action to make for a better, more equitable world.

You can hear his whole speech below but here’s part of what he had to say.

“Good evening. This evening as we go about our normal football business, we come before you standing united. As an organization, as a football team, as football men. From different ethnicities, social economic backgrounds, even countries of origin. We stand united by our talent and our love for the game of football. That love and those talents have taught us great tolerance and understanding. We realize that those blessing put us in the minority.

“We realize we’re privileged to have a platform. We’re committed to taking action and being part of the solution to face social injustice and prejudice that we all face not only in our country but worldwide. It’s our desire to be active participants in the formation of a more perfect union. That being said, we realize recent events are the continual reminder how far we are from that.”

In recent days, the sports world has again spoke out against racism. The NBA and NHL both went on temporary strike from their playoffs while several MLB games were postponed over the past 48 hours. Pittsburgh kept their practice schedule but according to players, have come together to do their part, like a team-wide voter registration effort with elections upcoming in November.

During Tomlin’s speech, all players were linked arm-in-arm. Following Tomlin’s message, the team gathered for prayer at midfield, joined by GM Kevin Colbert and team owner and president Art Rooney II. It was a powerful moment to begin the practice.

“We wanted to pause and share with those who are hurting tonight. We see you, we hear you, but most importantly, we stand with you.”

After practice, Tomlin was asked about the decision to begin practice with that message.

“We have social justice committees that are actively engaged in and processes that we’re going to participate in. Voter registration, police education and understanding and meetings with those guys, other things that put us out in the community. But tonight more than anything, we wanted to take the small platform that we have, as small as it is, just a scrimmage but to state that we stand United with those that are suffering and we see them and hear them. And regardless of our privilege, we’re sensitive to the hurt and pain and the struggle that’s going on around us.”