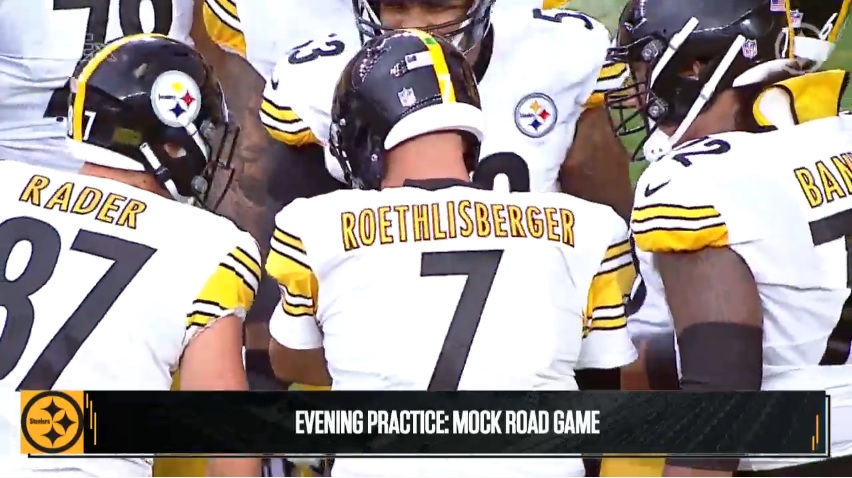 For the first time all training camp, the Pittsburgh Steelers gave us our best glimpse into what’s happening this summer. On their livestream last night, they showed parts of 11v11 drills. Footage was zoomed in, unable to see the complete picture, but it was a 180 from previous practices where the stream cutaway after individual work. Merry Christmas to us.

Full disclosure. Little bit of knowledge is a dangerous thing and this report won’t be nearly as complete as our usual camp diaries. Inferences based on 20-ish reps in one practice is setting yourself up for failure. As we always preach, camp is a marathon, not a sprint, and there’s plenty of moving and shaking this time of year.

With that out of the way, here are my notes from what happened Saturday night.

– Be sure to check out Dave Bryan’s injury report write-up for who did (and didn’t) participate.

Banner getting the nod over a dressed Chukwuma Okorafor, who ran 2nd team right tackle. So it’s obvious that battle is far from over and Tomlin confirmed as much after practice.

Mike Hilton with the pick six of Ben Roethlisberger during 7 shots. #Steelers pic.twitter.com/WrqyfDPpX8

– Really good day for Devin Bush. On the first play of the full-contact, run session, Bush scrapped over the top and stopped James Conner near the line of scrimmage. Later, he came backside of a pin and pull run to tap up Conner for a loss.

Nice scrape and tackle by Devin Bush. So excited for him in Year 2. #Steelers pic.twitter.com/PAH2tEn69Q

– Overall, defense won the run session. Aside from one Benny Snell run we’ll highlight in a moment, the defense was flying around the ball and winning the line of scrimmage. Goes into what Ben Roethlisberger saying the defense has clearly won camp. But hey, this D is as good as anything the Steelers’ offense will see this season. Week 1’s going to feel like a breeze.

– Couple new faces working with the 1’s. Looked like Alex Highsmith saw reps at ROLB with the first team. Ditto with Curtis Riley at SS. Riley had one nice run stop, shedding a James Washington stalk block to make the play.

– On offense, Chase Claypool saw work with the first team in 11 personnel with Diontae Johnson not working in team. Joined by James Washington and JuJu Smith-Schuster.

– Snell had the best run for the offense. Bounced it left side, stiff-armed Ola Adeniyi, and threw off Justin Layne before finally being taken down. Nice hard run and finish, his calling card.

Benny Snell dropped weight this season but still running with plenty of power. Good finish on this carry. #Steelers pic.twitter.com/6HYTS1F7au

– Another player who saw a carry? WR Ray-Ray McCloud. Designed to go to the right but he bent the run back and found a crease left side. He’s showing quite a bit of versatility.

– QB rep order: Ben Roethlisberger-Mason Rudolph-Devlin Hodges. Didn’t see any snaps for Paxton Lynch. Coming off a report of him struggling in Monday’s practice, that’s not a good sign.

– Looked like he was unblocked but Jayrone Elliott, signed two days ago, came flying in backside to tackle Jaylen Samuels for a loss. He is now wearing #45 after wearing #51 last season (that number’s now occupied by Tuzar Skipper).

– Nice day for Steven Nelson. JuJu Smith-Schuster caught a TD on him but he caused two incompletions on passes intended for Chase Claypool, including this jump ball in the end zone.

– But Joe Haden had the biggest hit of the day. Camera moved fast and on second and third look, it looks like this pass wasn’t intended for JuJu Smith-Schuster but he took the brunt of the blow just the same.

– Saw Cavon Walker working as the three tech. Rookie Carlos Davis as the one tech.