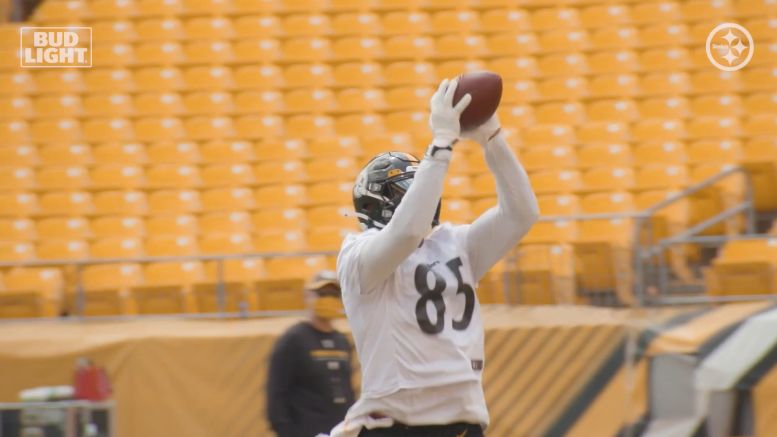 Pittsburgh Steelers inside linebacker Devin Bush has been busy during training camp getting to know several of the team’s new offensive weapons and especially when it comes to having to covering them in practice. On Friday, Bush met with the media ahead of the team’s training camp practice at Heinz Field and the former first-round draft pick out of Michigan was asked to comment on what it’s been like to cover new tight end Eric Ebron and rookie running back Anthony McFarland Jr. and especially in one-on-one drills

Bush first commented on McFarland, who was drafted in the fourth-round this year out of Maryland.

“Yeah, Anthony McFarland’s a really good running back,” Bush said. “I played him in previous years in college so I’m already familiar with his skill set and I think he’s doing a good job of adjusting. I think he’s going through his rookie things, which is just learning how to be a professional and how to take on practice and compete. And just going one-on-one, he’s learned a lot from me and I’m learning a lot from him. And iron sharpens iron so we get each other ready to take those live reps and then go into the game action and put it on display.”

Bush did play against McFarland once when he was at Michigan and that happened in October of 2018. In the that contest against Maryland, McFarland, who was a freshman at the time, rushed nine times for 34 yards against Bush and the Michigan defense and also caught one pass for 7 yards. Bush, on the other hand, had seven total tackles in that contest that Michigan won 42-21.

Bush also had quite a few things to say about Ebron on Friday as well.

“Yeah, he’s a different type of tight end to me,” Bush said. “He’s very elite just with his athleticism and how rangy he is. He has receiver-like movements, his cuts are receiver-like, his speed, the way he catches the ball, how he used his body.”

Having Ebron to go against in practice every day isn’t a bad thing at all for Bush, who did struggle some during his rookie season when it came to covering tight ends. In fact, three of the five touchdowns that Bush allowed in coverage as a rookie were against tight ends.

The Steelers are hoping that the addition of Ebron this year adds another dimension to the team’s offense that will make it very hard on opposing defenses to defend and matchup against and especially inside the red zone. To date, Ebron has registered 27 receiving touchdowns in his NFL career and 22 of them have come inside the red zone.

“So, I mean, I think he’s a mismatch with just any position you put him at because he has very long arms, he catches the ball really well and he runs really good routes,” Bush said of Ebron on Friday.