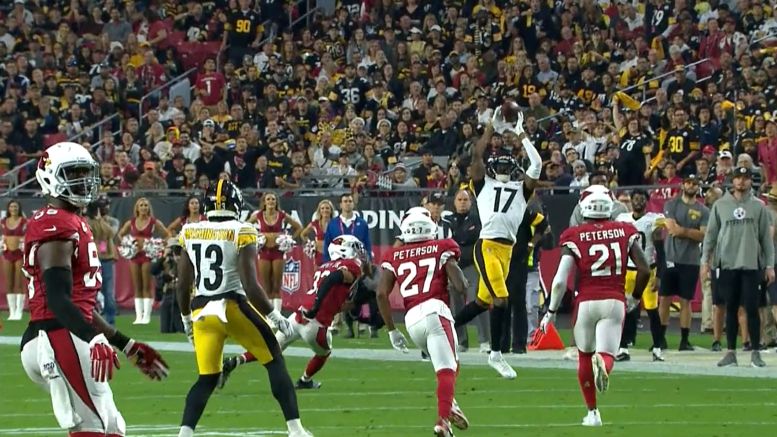 This is probably the last topic we’re going to talk about in the training camp battles series, unless you can think of something that we haven’t addressed already, because it feels like we’ve just about covered everything else, but if you have something in mind that you feel we’ve glossed over, please feel free to mention it in the comments.

The way the game is played today, you really need not just three good wide receivers, but really four, and maybe even five. The Steelers know they have three talents in JuJu Smith-Schuster, James Washington, and Diontae Johnson, who all have NFL-level production, and they’re confident in Chase Claypool, their rookie second-round pick.

But what about the rest of the group? There will be at least one more wide receiver on the depth chart, and most likely two. More often than not, the Steelers do carry six wide receivers, and sometimes they even carry a receiver they know doesn’t play special teams, like Justin Hunter, who is often a healthy scratch.

They do return two receivers from the group listed above you spent a good amount of time on the 53-man roster last season, and in fact the majority of the group ended the year elevated above the practice squad.

Switzer is going into his third year with the team, and of course ended up on injured reserve. Cain was signed with six games to go and made sporadic but notable contributions over that stretch. Darboh was on the practice squad but called up due to injury at the end of the year.

Johnson and Blacknail are both young, tall, big, and fast, stuff that you can’t coach. Neither of them have made a dent in the NFL up to this point. Can they change that now? It will be really hard without a preseason, but all they can do is make the most of every opportunity that they do get.