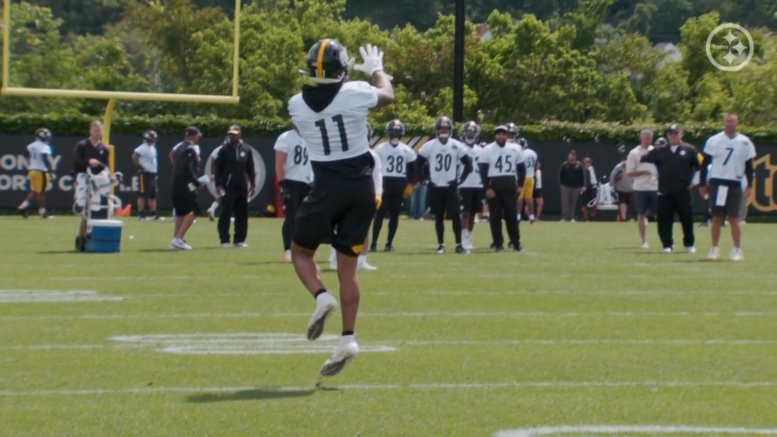 He didn’t even finish the season with the Steelers, but leaving Donte Moncrief out of this series would be missing a big part of the Steelers’ story for the 2019 season. The front office signed the veteran free agent believing that he would be their number two starting wide receiver next to JuJu Smith-Schuster as a partway measure of replacing Antonio Brown, whom they were forced by the player to trade.

Moncrief suffered a finger injury in training camp and basically was never the player he was brought in to be. While he did start in the opener, and in Week Two, he was clearly having issues. On the year, he caught only four of 15 targets, and Pro Football Reference is generous in assigning only four of those as drops. One drop in Week Two led not only to an interception for Mason Rudolph, but to his benching.

It wasn’t a permanent benching, as he would play in three more games, but he would never regain his starting position, with rookie Diontae Johnson emerging over the course of the year. Toward midseason, the Steelers released him in order to preserve the compensatory pick they were expecting for Le’Veon Bell, which turned into Alex Highsmith, after the Philadelphia Eagles let L.J. Fort go.

Moncrief would be picked up by the Carolina Panthers after the Steelers parted ways with him. He was active for three games, but never targeted, even if he played a couple handfuls of snaps. They let him go before the season was over, in early December.

Since then, the former third-round draft pick has been unable to find a home in the NFL, but the San Francisco 49ers did host him for a workout last week. There is a possibility that he lands with a team before the regular season begins, or perhaps sometime during the year, but at this point it would clearly come at a bargain rate.

As for the Steelers, they already moved on with Johnson, who will start alongside Smith-Schuster this year, and third-year James Washington, who led the team in receiving yards. They added second-rounder Chase Claypool in the 2020 NFL Draft and have a small stable of tall and fast projects headlined by Deon Cain who are vying for a roster spot as well.