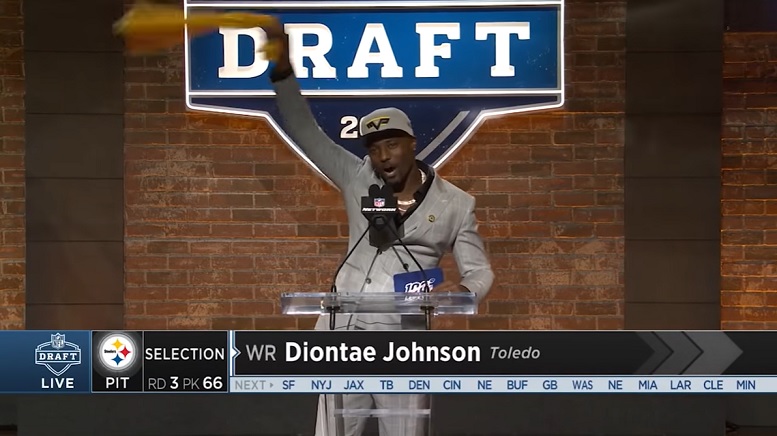 For starters, the Steelers should be expected to select a wide receiver at some point during this year’s draft because they have a long history of doing just that every year. In fact, only three times since general manager Kevin Colbert arrived in Pittsburgh in 2000 have the Steelers not selected at least one wide receiver during a draft. The last time such an event occurred was in 2011, which was one year after the team selected two wide receivers, Emmanuel Sanders and Antonio Brown, in the 2010 NFL Draft.

Currently, the Steelers have a more than decent looking depth chart when it comes to the wide position and it includes JuJu Smith-Schuster, James Washington and Diontae Johnson. However, it also includes the likes of Ryan Switzer, Deon Cain, Amara Darboh, Jamal Custis, Quadree Henderson, Anthony Johnson and Saeed Blacknall and those seven wide receivers have combined to catch 84 passes in the NFL with Switzer having caught 67 of them. None of those seven wide receivers should be considered locks to make the 2020 team right now.

While Washington, the Steelers 2018 second-round draft pick showed a lot of improvement in his second season with 44 receptions for 735 yards and three touchdowns, he’s still far from an established and proven commodity at the NFL level. Hopefully he’ll take another big step forward in 2020 with quarterback Ben Roethlisberger returning.

Johnson, on the other hand, the Steelers first of two third-round 2019 draft picks, led all rookie wide receivers last season in receptions and now just needs to take the next step forward in his sophomore season. It’s so far, so good with the Toledo product so let’s move right along and not jinx him.

As for Smith-Schuster, who’s 2019 season was impacted greatly by a knee injury and a concussion, 2020 is a very big year for him as he needs to show that he can return to his 2018 Pro Bowl form. Smith-Schuster, the Steelers 2017 second-round draft pick, is also now in the final year of his rookie contract and thus barring an extension this summer, he might get a chance to test free agency next March if he doesn’t play well enough in 2020 to warrant the organization placing the franchise tag on him.

Mind you that I’m not predicting that 2020 will be Smith-Schuster’s final season with the Steelers, but only that it’s worth pointing out that it could be if he doesn’t bounce back. Like it or not, until he has a new contract, Smith-Schuster must be considered a potential unrestricted free agent loss next March.

Right now, the Steelers are essentially one injury away from a player such as Cain or Darboh seeing increased playing time. Sure, the Steelers signed tight end Eric Ebron this offseason and he’s essentially another wide receiver. Even so, he’s officially a tight end and not expected to be an every-down player.

It’s true that any wide receiver drafted by the Steelers this year might not see the field much on offense in his 2020 rookie season. That very thing happened with wide receiver Martavis Bryant during his 2014 rookie season and again with Sammie Coates in 2015. Heck, had veteran wide receiver Donte Moncrief not literally dropped the ball last season and Smith-Schuster not went down injured, Johnson also might not have seen the field much on offense as a rookie. Regardless, the Steelers need to keep the wide receiver pipeline moving along next weekend and I believe they will. The only question at this point in my mind is if that refilling of the wide receiver pipeline will happen with one of the team’s first two selections. Don’t be surprised if that’s what occurs.