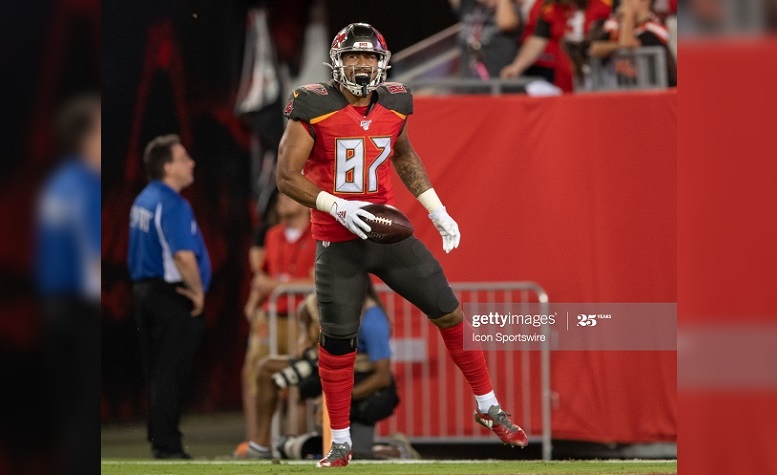 The Tampa Bay Buccaneers waived tight end Jordan Leggett on Thursday and while he’s certainly not a high-profile player, he could be one to watch when it comes to the Pittsburgh Steelers possibly having interest in him. Why? Because they had interest in him a year ago May.

Immediately following Leggett being waived by the New York Jets in May of 2019, the Steelers were one of four NFL teams that attempted to claim the Clemson product. The Buccaneers had the highest waiver priority at the time, however, and were thus awarded Leggett.

Leggett was inactive for the next eight games before returning to the Buccaneers practice squad in Week 17. After the 2019 season ended, Leggett was then re-signed by the Buccaneers to a Reserve/Futures contract.

The Steelers ship for Leggett may have sailed for good by now. Even so, the team did recently sign former Utah State tight end Dax Raymond after waiving tight end Christian Scotland-Williamson with a non-football injury designation. Raymond, however, doesn’t have any NFL experience to date while Leggett has appeared in 15 games since being selected by the Jets in the fifth-round of the 2017 NFL Draft.

For whatever it’s worth, the Steelers reportedly had dinner with Leggett around the time of Clemson’s 2017 pro day.

Leggett is scheduled to earn $825,000 in 2020 so that’s the salary the Steelers would inherit if they were to claim him off waivers. It’s probably doubtful they will, but it won’t be overly surprising if they do because of the past interest they’ve had in him. We’ll find out by Friday night.