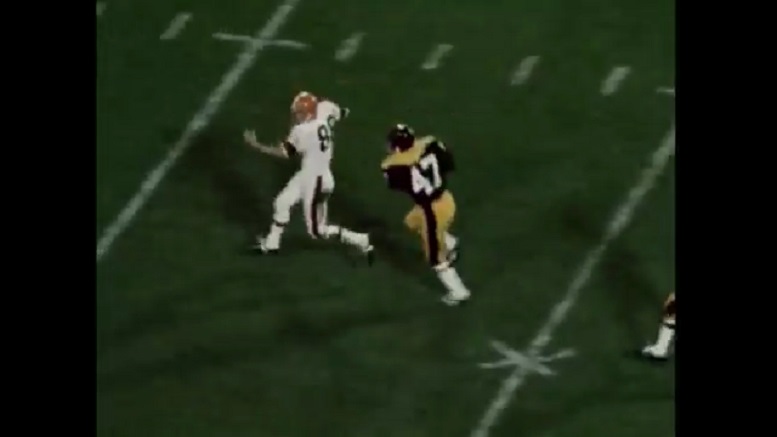 The revival of this series continues this Sunday with a look back at the last Steelers player who wore No. 47 before Hall of Fame cornerback Mel Blount wore it and made it famous.

In September of 1964, the Steelers traded kicker Lou Michaels to the Baltimore Colts in exchange for linebacker Bill Saul and running back/cornerback Marv Woodson, first-round draft pick that year out of Indiana. Woodson, who played just three games for Indiana in his final college season due to a serious knee injury, reportedly didn’t make as smooth of a transition on the defensive side of the football as the Colts had hoped he would when they drafted him. They also had plenty of good running back depth at the time so that’s mainly why they traded Woodson to the Steelers.

Outside of a few nice kickoff returns in his rookie season as a member of the Steelers, Woodson, who wore No. 47 with the team, didn’t contribute much in the few games he played in prior to needing knee surgery. That knee surgery landed Woodson on the Steelers Reserve/Injured list later in that 1964 season.

In 1965, Woodson was moved primarily to cornerback by the Steelers. He played in the Steelers secondary the next four and a half seasons from 1965-1969 on his way to registering 18 interceptions in the 67 games he suited up for while in Pittsburgh. Woodson was even voted to the Pro Bowl after the 1967 season after registering 7 interceptions on defense. He was the only Steelers player voted to the Pro Bowl that year.

In 1968, Woodson was abruptly waived by the Steelers and their new head coach Chuck Noll that November and after eight games played. He said at the time he was likely to retire and attributed that decision to injuries and not playing well at safety, a position he was moved to from cornerback earlier that season due to other injuries to other players.

“It would be ridiculous to say I won’t miss the game,” Woodson said after being waived, according to the Pittsburgh Post-Gazette. “But this thing has gradually built up. I hurt my shoulder in the second exhibition against New Orleans, wasn’t activated until before the second game with Philadelphia and have had knee and toe injuries since.

“I know that I wasn’t doing as good a job at safety as a cornerback. I was just out of position. Of course, our 1-8 record contributed, too. I decided in the dressing room on Sunday to quit. On Monday I had a meeting with Coach Noll. We went over the entire situation.”

Woodson wound up being claimed off waivers from the Steelers by the New Orleans Saints and he finished out the 1969 season with them. His NFL career was over after that season ended. The Steelers ultimately drafted Blount in the third-round of the 1970 NFL Draft out of Southern and the rest his history.

While Woodson’s career in Pittsburgh wound up being fairly insignificant, unmemorable and greatly overshadowed by the career of the player who would take over the No. 47, Blount, only 17 different Steelers players have managed to record more interceptions during their respective careers in Pittsburgh than he did. Blount is one of those 17 players and his 57 career interceptions is still a franchise best.

You can see Woodson (No. 47) play as a member of the Steelers in a 1967 game against the Cleveland Browns in the video below. He registered two interceptions in that game.