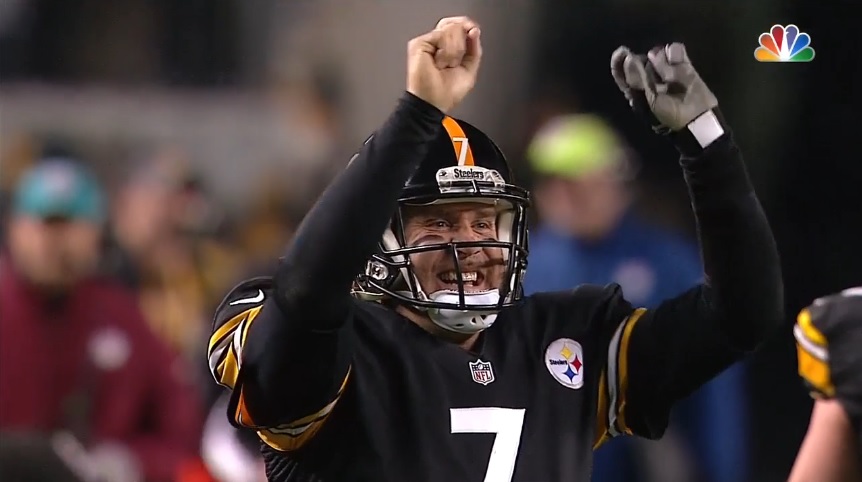 The two-week stretch of late October and early November 2014 is arguably the best we’ve ever seen Ben Roethlisberger. Last week, I wrote about Roethlisberger’s 6-touchdown game against the Indianapolis Colts in 2014.

This week, I went one week further in the 2014 season to flash back to the Nov. 2, 2014 6-touchdown game by Roethlisberger against the rival Baltimore Ravens at Heinz Field.

Despite rolling to a 43-23 win over the Ravens that night, Pittsburgh started out slow.

Trailing 7-0 midway through the second quarter, Roethlisberger hooked up with Le’Veon Bell from 5 yards out to get the Steelers on the board. It’s pretty remarkable to see Bell line up at receiver and win all these years later.

That TD from Roethlisberger to Bell helped BBR catch fire. From there, the future Hall of Fame quarterback lit up the Ravens in the second quarter.

In the red zone looking for the lead, Roethlisberger threw to a wide-open Martavis Bryant for a 14-7 lead.

Following Bryant’s touchdown, Baltimore drove down the field and settled for a 46-yard field goal from Justin Tucker late in the first half, making it a 14-10 game. The Steelers weren’t willing to sit on that lead heading into the half.

Dialing up a deep ball for the first time in the game, Roethlisberger found Markus Wheaton down the right sideline for a 47-yard touchdown right in front of the front pylon.

Roethlisberger then found Matt Spaeth for the two-point conversion, sending the Steelers into the half with a 22-10 lead.

Things slowed down in the third quarter as both teams were sluggish coming out of the locker room, but Roethlisberger heated up again at the start of the fourth quarter, finding Antonio Brown for a 54-yard catch-and-run touchdown through the Ravens’ defense for a 29-10 lead.

When I think of Brown, I think of this play right here, along with a handful of others. His ability to make plays after the catch was so remarkable. He broke so many ankles with one simple move to get free.

The very next play, Baltimore’s Jacoby Jones responded with a 108-yard kick return for a touchdown, making it 29-17.

Roethlisberger answered quickly though, driving the Steelers down the field in nine plays, finding Bryant for his second TD of the game, this time between two defenders.

That touchdown looked very similar to the first BBR-Marty B touchdown against the Colts a week prior.

Baltimore then made it a 36-23 game on a 1-yard TD pass from Flacco to tight end Crockett Gillmore, but Roethlisberger struck one more time for good measure.

Look at the touch on this lob pass to a wide-open Spaeth for a 33-yard touchdown. What a game.

With back-to-back 6-touchdown games, Roethlisberger set an NFL record that still stands to this day.