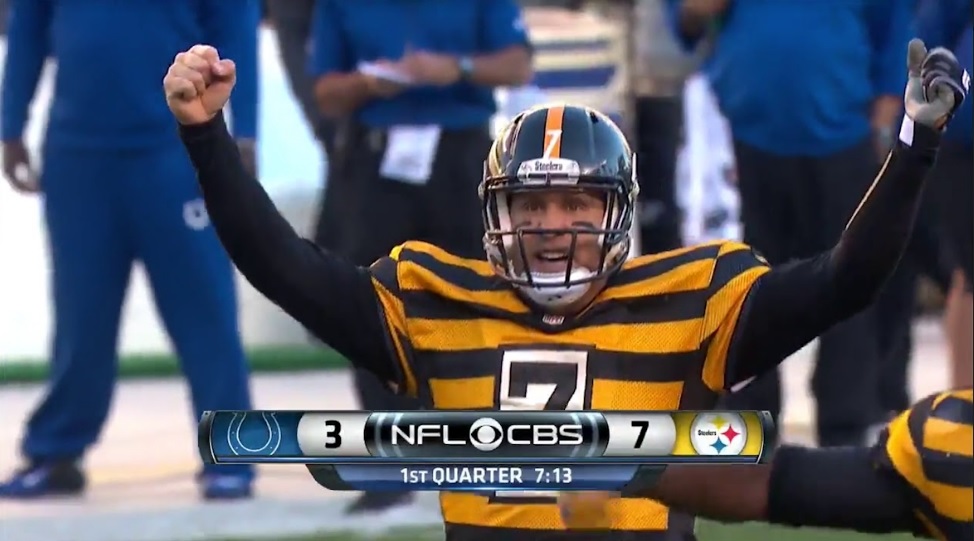 “Perhaps the greatest pure passing exhibition I’ve ever seen. Like Babe Ruth and Lou Gehrig dazzling the railroad-stop yokels with an array of towering moonshots, or a pair of backyard Goliaths picking on the neighborhood kids, Ben Roethlisberger and Andrew Luck descended from a higher plane to toy with the overmatched competition for a few hours.”

That’s what NFL.com analyst (and my personal favorite) Chris Wesseling had to say about the passing display that Ben Roethlisberger and Andrew Luck put on at Heinz Field on Oct. 26 2014, a 51-34 Steelers win. Wesseling ranked this game the No. 1 game of the 2010s in his March article “NFL Game Pass viewing guide.”

Roethlisberger himself went 40-49 for 522 yards and 6 touchdowns to carry the Steelers to a thrilling win at home in their 1933 bumblebee throwbacks.

Full disclosure for me: I was driving back through Western New York to grad school at Syracuse during the game and listened to the whole thing on the radio, thanks to SiriusXM. Really, I’d never heard Billy Hillgrove and Tunch Ilkin so excited.

While I listened to the game live, when I got back to school I fired up Game Pass, and wow was it fun to watch. It’s still fun to watch now.

Right away, Roethlisberger lit up the Colts, firing this back-shoulder strike to Markus Wheaton at the front pylon of the end zone following a pump fake.

Shortly after staking the Steelers to a 7-3 lead, Roethlisberger struck again, this time finding Martavis Bryant on a quick strike in the end zone to make it 14-3. This play right here showed me what type of groove Roethlisberger was about to be in for the duration of the game. He knew exactly where he wanted to go with the football before the snap due to the defensive alignment, and then fired a strike.

On the next play from scrimmage, William Gay picked off Andrew Luck and returned it for a touchdown, giving the Steelers a quick 21-3 lead.

The Colts came back to make it 21-10 on a beautiful 21-yard throw from Luck to Dwayne Allen, but then it became the Bryant and Antonio Brown show for the Steelers as Roethlisberger did whatever he wanted with the football.

That one-handed grab pinned to the helmet over Greg Toler is one of the best catches I ever saw from AB. It’s a shame watching games like this from AB and knowing what transpires in the future. He was electrifying, the best WR in the game, bar none.

I miss his on-field talent immensely.

Later, the Steelers ran nearly the same exact play to Bryant, who made a great twisting catch over Josh Gordy for the touchdown. The route was on.

The Colts didn’t go away though as Luck found Donte Moncrief and TY Hilton for touchdowns to make a game of it, but Roethlisberger and the Steelers put the game away for good on an 11-yard touchdown from Roethlisberger to Heath Miller on 4th and inches, and an Antwon Blake interception in the end zone to seal the thrilling win.

Knowing what Moncrief became in Pittsburgh during his brief time, it’s hard to watch him go for 7/133/1 against the Steelers all those years ago.