It’s tough to learn much from Zach Gentry’s rookie year. He was more raw than your typical rookie, something the Steelers freely admitted when they drafted him in the 5th round. And despite the many issues and injuries at tight end last season, Gentry wound up playing just 50 snaps, catching one pass. Small sample size to work off of.

In reviewing the tape and knowing what we knew about him coming out of Michigan (and what he did in camp/preseason), there’s still plenty of work to be done as a blocker. I went back and checked out all 18 of Gentry’s run blocking snaps from a year ago. It was a little better than what I thought, not that Gentry was asked to carry out difficult assignments. Lot of stuff away from the play or down blocks where he could use his 6’8 frame to seal. He did a nice job of positioning, awareness, and getting his hips set to put himself in the right spot.

But when you’re 6’8, you have a natural leverage disadvantage. Saw it on the very first snap of his pro career. A difficult moment and equally tough assignment, facing the 49ers’ Arik Armstead, but you see him pop up on contact, get jolted back, and lose the rep. Gentry is #81 here, in case you forgot. 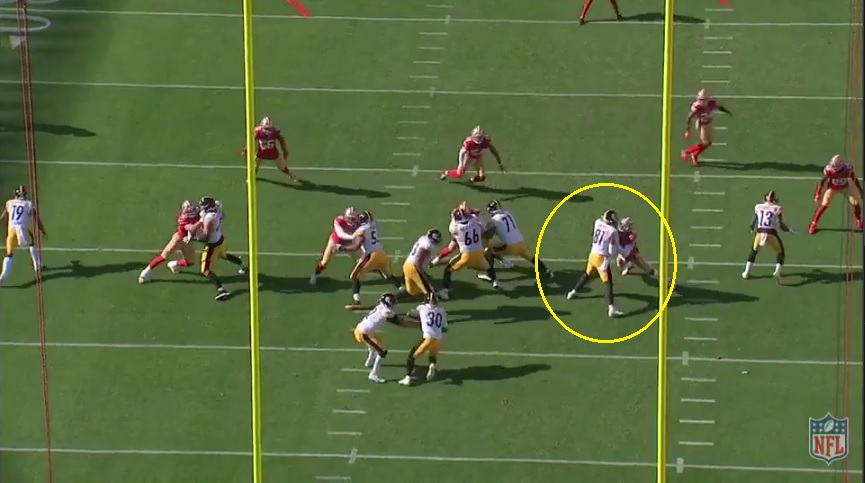 I just want to see him do a better job rolling his hips through contact. Beginning with proper pad level off the snap, on contact, and running your feet (you pop up when your feet stop). It’s a step he’ll probably be able to take. At least improve on. We won’t get to see it this year at camp (and that makes me very sad) but there’s almost always a big difference from year one to year two when they get on the sleds. You don’t even have to see it. You can hear the pop on contact and know if it was a good/bad rep.

And I suspect Gentry will be more comfortable this time around. Vance McDonald and Eric Ebron can catch passes. Gentry, whenever he sees the field, will be counted on as a blocker. And he’s got work to do.