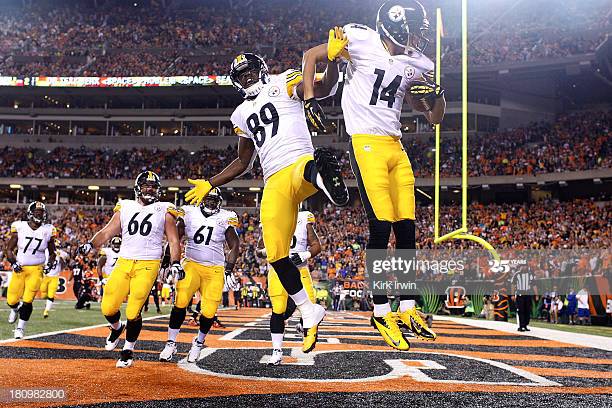 Bringing back this series to finish up the offseason. We’ll start with Moye, who shined brightly for the briefest of moments in Pittsburgh.

A star receiver at Penn State, Moye signed with the Steelers in November of 2012 after quick stops as a UDFA in Miami and New Orleans. Known for his 6’5 frame and potential jump ball ability, fans were quick to hype him up.

He was carried into the 2013 training camp, performing well, and earning that classic summer buzz. Like this preseason touchdown, Landry Jones connecting with Moye from ten yards out.

But he wasn’t just a big target. Moye earned credit for crazy effort – one that could’ve been included in our top ten series if this wasn’t preseason – for running down a Josh Norman INT two weeks later.

After that game, Moye made his case to make the squad.

“I think I’m a hard worker,” he said at the time. “Play hard on the field. Whatever I can do to make the team better, that’s what I’d like to do.”

Plays like those earned him the final WR spot on the 53 man roster for his first regular season action. In 2013, he played 57 snaps on offense, and just four on special teams, hauling in two receptions and his first – and only – touchdown. A jump ball from Ben Roethlisberger under the lights against Cincinnati.

Moye wasn’t exactly Johnny Holton but throwing to him wasn’t the most efficient route. Two completions on six targets and one interception in Week 17 against Cleveland.

Some of that fan-favoriteness stemmed from his presence in the community. Moye was a regular at Steelers’ charity basketball games, I *think* he even played at my high school, and he showed his hops on the hardwood.

Pittsburgh held onto him through the summer of 2014 but he didn’t make the 53 the next time around, cut and inked to the practice squad. He was cut October 15th to make room for a slew of practice squad faces: DE Ethan Hemer, OL Adam Gettis, and CB Jordan Sullen.

Moye went unclaimed on waivers but was signed to the Tennessee Titans practice squad a week later. He never received a promotion, didn’t make it to the 2015 offseason, and his NFL career was over.

There hasn’t been a ton of info on Moye for his post-career. He got back into coaching and for 2019, was named the head coach of Western Beaver High School.

Western Beaver has offered its head coaching position to Derek Moye, a former Rochester and Penn State star who played briefly with Steelers. His hiring will become official at Wednesday's school board meeting. #BCTsports #wpial

Though he led the team to a strong, 7-3 season (they went 3-7 the year before) Moye resigned after one year. Mike Bires of The Times Online broke the news in mid-November, citing personal reasons for the decision to step down.

One of Moye’s notable moments came in their worst loss of the season, a 36-0 shellacking by Neshannock. Moye agreed to let Neshannock’s Jeremy “Boomer” Nativo, a senior with Down syndrome, into the game to score a 34 yard TD in the final minute.

Per The Trib’s Jerin Steele.

“Western Beaver coach Derek Moye said his team learned Nativio was entering the game late in the fourth quarter and felt it was the right thing to do to help him have a memorable moment.

“That was classy of them to let Jeremy get in the game and get a touchdown on senior night,” Mozzocio said. “I appreciate that from Coach Moye and his players. That was first class all the way.”

Derek Moye, your blast from the past.