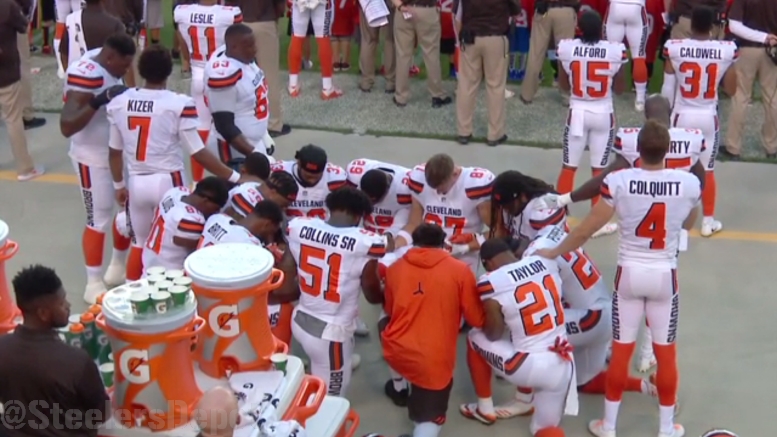 Sports leagues all over the place have been put in the position in which they are taking a long, hard look at some of their practices in certain areas of governing their players and where their priorities lie. The NFL, spurred on by a star-studded player video calling upon the league to give voice to change, appears to be on the path toward doing this within their own sphere, led by Roger Goodell’s video response.

The central public issue has become the league’s previous response to players choosing to kneel for the national anthem. In 2018, they attempted to introduce a policy that would result in players being fined and teams being disciplined if their players did so, but it was ultimately scrapped after a back-and-forth with the NFLPA.

Meanwhile, all 32 teams are having dialogues in their meetings about race, policing, conceptions of justice, family, protests, and all sorts of subjects along those lines. Goodell’s video seemed to suggest that it would be supportive of players participating in protests, but did not specify or directly state that.

Really, I don’t think the NFL knows right now what it’s going to do. Teams don’t know what they’re going to do. Just take the Cleveland Browns, with new head coach Kevin Stefanski having been asked about his approach to the situation.

“I can just promise you this, we will spend as much time as needed to make sure that we are all on the same page and we are a united front from a player, staff” standpoint, he said. When asked to clarify what he means by this, he said that he doesn’t know right now.

“That is one of many issues we need to talk about in this movement, if you will. That is something that I promise you we will spend as much time as necessary as an organization listening to each other, understanding each other and then we will make a decision together”, he said. “I hesitate to say because I want to make sure that I am sitting with our guys on things like that”.

It’s worth keeping in mind that in 2017, Pittsburgh Steelers head coach Mike Tomlin insisted that his team have a ‘united front’, which resulted in a lengthy team meeting that took up time during the week, and was still botched, and unnecessarily triggered a controversy.

Here’s the thing, though. I don’t think players this year are going to let teams get away with that. If teams want a ‘united front’ and the consensus is that nobody will kneel, if some players want to kneel, they’re still going to do it. A lot of players in the past week and a half have expressed regret that they allowed themselves to be pressured not to stand up for their beliefs the last time around.

And it goes for the reverse, too. If a team’s consensus ‘united front’ is to take a knee during the anthem, you’re simply not going to get every player to do it. And that isn’t how it should be, anyway. This is a matter of personal choice, and I think we have reached a point in which players will now refuse to allow their individuality to be taken away on this subject. Or at least that will be the case with many players on teams who seek to take the ‘united front’ approach that the Steelers botched three years ago.