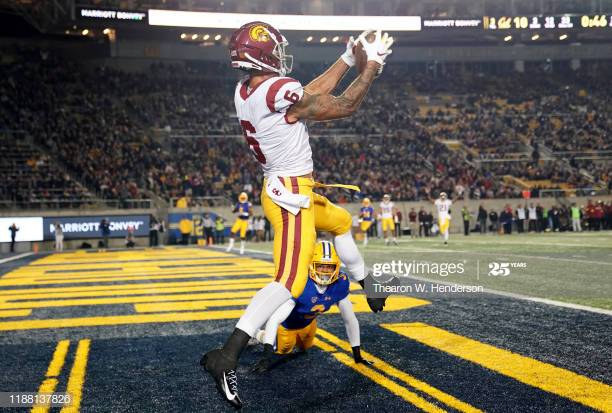 Day One of the 2020 NFL Draft is in the books. It was one for the history books given its virtual nature but by the time the picks rolled in, the draft was semi-conventional. A couple surprises, head scratchers, but chalk near the top with very few trades, especially early on.

With that in mind, and a little more clarity for Day Two when the Pittsburgh Steelers get on the clock at #49, here are some options that make sense in Round 2.

Jonathan Taylor/RB Wisconsin – Only one running back went in the top 32, Clyde Edwards-Helaire closing out Day One to the Super Bowl champ Chiefs. It’s certainly possible Taylor is gone by the mid-second, it’s hard not to see at least one running back being taken, but there’s also D’Andre Swift, JK Dobbins, and Cam Akers available. All could be options for Pittsburgh though Taylor and Akers feel like the best “fit,” given the history of Kevin Colbert drafting big running backs.

With Taylor’s size, athleticism, and production, he’ll very much be in the Steelers’ crosshairs. The other backs may be in play, too. Dobbins would offer big-play ability the run game lacks.

Michael Pittman Jr./WR USC – Sans Denzel Mims, the receiver run we expected happened on Day One with six being taken in the first round. That may create a bit of a drought with so many teams getting their guy. That’s to the Steelers’ benefit. Pittman just fits and feels like someone who belongs in black and gold, a high character, productive, Power 5 wideout with NFL bloodlines. Clemson’s Tee Higgins checks similar boxes and the Steelers’ brass were at his Pro Day.

Matt Hennessy OG/C Temple OR Lloyd Cushenberry III/C LSU: Two of the top interior offensive linemen left on the board after Cesar Ruiz went to the Saints. Steelers reportedly have interest in Hennessy while Cushenberry is up there in terms of talent and has better size/length at the position. Neither would be a sexy pick but certainly plausible.

Lynn Bowden/WR Kentucky – Want to chuck in a wildcard? Haven’t talked about him much, myself included, but Bowden is an overall playmaker who could play receiver, running back, returner, and heck, even quarterback. If you’re looking for a guy you feel can get on the field for 10-15 snaps a game, wear a lot of hats, this is the dude. Sure Bowden showed up when they watched Benny Snell last year. He could also be in the mix at #102, too.

Laviska Shenault/WR Colorado – If you want a player with a similar outlook as Bowden but more conventional in terms of where he’ll go, Shenault might be your dude. He’s viewed as a receiver but was used a runner and a go-to option for the Buffs’ offense in clutch situations. He’s big, powerful, and plays with an aggressive style that’s led to injury, including recovering from core muscle surgery after the Combine. He’d be a combination of playmaker who would find his way on the field in Year One. Gerry Dulac seemed to hint at interest late last night on Twitter, though it’s unclear how much of a report vs speculation it was.

Antoine Winfield Jr./S Minnesota – Similar statements can be made about Winfield as you could Pittman Jr. It’s more likely the Steelers add someone on offense but Winfield’s versatility, athleticism, and ball skills (seven interceptions in 2019). Tomlin coached his dad in Minnesota. We’ll see if he lasts but it’s obviously possible.

Justin Madubuike/DT Texas A&M OR Neville Gallimore/DT Oklahoma – Putting these two together for similar reasons. I like both players, Madubuike a little more (he’s longer, stronger, shows more bend) but both would offer a play style akin to Javon Hargrave. Again, offense is more likely but the value here could win out if some of the top backs and other receivers are gone.

Trade Back – The other option. With Pittsburgh having such limited draft capital and good depth in this class overall, the team could fall back and pick up a mid third rounder. Especially if a QB is there; only four, as expected, went on Friday. Still leaves Jalen Hurts, Jake Fromm, and Jacob Eason for teams to move up for. Having a day for almost every club to get on the virtual clock, work the phones, and make their picks could make them more comfortable to trade on Day Two.

Devin Duvernay/WR Texas – This outlook is obviously partially dependent on what happens at 49. But if they don’t get a receiver to start, Duvernay is a logical fallback option. Slot/speed option who’s been popularly mocked to the team, for whatever it’s worth. He ran a 4.39 at Indy and caught over 100 balls as a senior.

Curtis Weaver/OLB Boise State – Like the odds of an EDGE rusher going late Day Two or early Day Three. Weaver has plenty of experience playing on his feet, dropping into coverage, and has heavy production. 34 career sacks with an excellent 7.00 three cone time at 265 pounds.

Alex Highsmith/OLB Charlotte –  If not Weaver, then Highsmith is right up there in terms of players the Steelers are eyeing. Impressive athlete, exploded statistically in 2019, with a good pass rush plan and upside. Steelers’ assistant coach Denzel Martin coached Highsmith during the Shrine Game and the team had a FaceTime visit with him. Lot of smoke around the name.

John Simpson/OG Clemson – Gotta feel like they draft a Clemson Tiger at some point in the draft. We’ve spent lots of time on K’Von Wallace, Tanner Muse, even a little bit of Higgins, but very little on Simpson. Great size, mauler in the run game, battled through an ankle injury in 2019. But don’t forget his name and someone who could push for the starting LG job out of the gate should the team feel compelled to keep Matt Feiler at RT.

Brandon Jones/S Texas OR K’Von Wallace/Clemson –  Lumping these two together. Also early Day Three options, difference between the Steelers’ third round pick and first fourth rounder isn’t far (22 picks) but Pittsburgh may want to jump on things early. Jones is a high IQ safety who showed plus athleticism while Wallace is hearts/smarts who can play safety or in the slot.