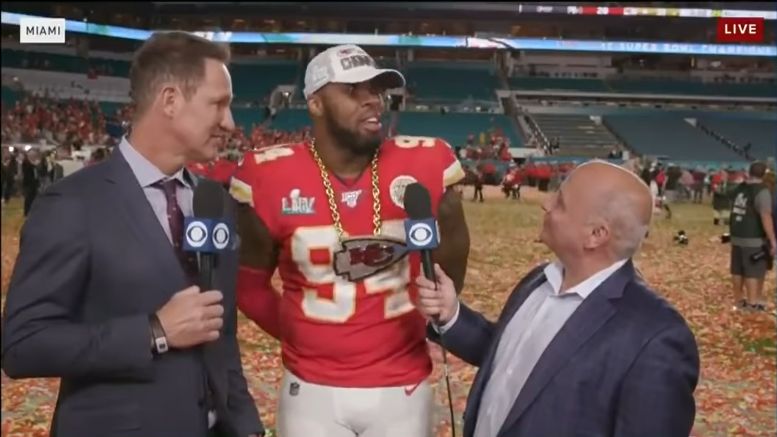 It appears to have been prophesized that, from now on, every time the San Francisco 49ers make the Super Bowl, Terrell Suggs is going to be on the team that beats them. Following a 16-year career with the Baltimore Ravens, who defeated the 49ers in the Super Bowl in 2012, he returned earlier this week with the Kansas City Chiefs, beating them again for his second ring.

The 17-year veteran chose to sign with the Arizona Cardinals in free agency, but in a partly mutual decision late in the year, the team waived him. He wanted to finagle his way back to Baltimore, but chose to report when the Chiefs claimed him, and as a result of that decision, he is now a two-time Super Bowl champion.

Not that he was a major contributor once he moved on to Kansas City, Missouri. He only got up to around half the snaps in any one game. He did get one sack while there, and three tackles. He had another four tackles in three postseason games.

He added that Andy Reid was a big selling point on his agreeing to report once the Chiefs claimed him, and he was really excited about his finally being able to hoist the Lombardi Trophy in his 21st season as a head coach.

If he does not play another down of football, the question is, does he go into the Hall of Fame? He will retire with 139 career sacks, 895 tackles, 202 for a loss, 37 forced fumbles, 15 recovered with one touchdown, seven interceptions with two touchdowns, 63 passes defensed, and a safety. He’s a seven-time Pro Bowler, a two-time All-Pro (once first-team), a Defensive Rookie of the Year, Defensive Player of the Year, and a two-time Super Bowl champion.

For some perspective, his 139 sacks ranks him just ahead of DeMarcus Ware for the eighth-most in NFL history. Of the seven players ahead of them, all of them are in the Hall of Fame shore of Julius Peppers, who won’t be eligible until 2024. Ware won’t be eligible until 2022, but the eight of the top 11 sack-producers who are currently eligible for the Pro Football Hall of Fame are in.

Only two players in the top 19 who are eligible are in. There are 34 players in NFL history with 100 or more sacks. Kevin Greene is the only one on that list who ever played for the Pittsburgh Steelers, and that was but a small but critical portion of his career.