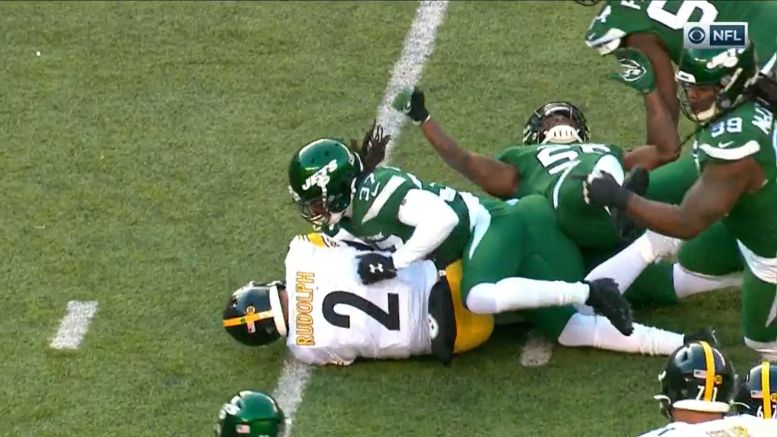 Pittsburgh Steelers quarterback Ben Roethlisberger isn’t the only passer on the roster recovering from injury this offseason as his backup, quarterback Mason Rudolph, is as well. Rudolph, however, suffered a much less serious injury than Roethlisberger did, and the latest report has him now resuming throwing.

According to Jeremy Fowler of ESPN, Rudolph recently resumed throwing footballs coming off surgery for a fractured AC joint that he suffered late last season. He’s expected to be a full go for offseason work, according to Fowler on Friday, and could get significant reps during the summer as Roethlisberger recovers from elbow surgery.

Mason Rudolph recently resumed throwing footballs coming off surgery for a fractured AC joint. He’s expected to be a full go for offseason work, and could get significant reps as Ben Roethlisberger recovers from elbow surgery.

Rudolph, who was 5-3 last season in the eight games that he started after Roethlisberger was lost for the year to an elbow injury in Week 2, completed 176 of his 283 total pass attempts for 1,765 yards with 13 touchdowns and 9 interceptions. The former third-round draft pick out Oklahoma State was benched in Week 10 for poor play and didn’t see the field again until the team’s Week 16 road game against the New York Jets.

In Rudolph’s return to the field against the Jets as an in-game replacement for struggling rookie undrafted quarterback Devlin Hodges, he completed 14 of his 20 total pass attempts for 129 yards and a touchdown. That solid showing, however, was cut short by a left shoulder injury suffered later in the third quarter when Rudolph was sacked.

“I thought it was a bad AC sprain. I played a couple more plays and throws with it”, Rudolph said later after the game. “Adrenaline was still pumping. Once I came over to the sideline it stiffened up and I was like, ‘I can’t even move my left arm or left side of my body’. It was pretty painful.”

It was quickly discovered that Rudolph had suffered something much more serious — posterior sternoclavicular dislocation and it resulted him undergoing a surgical procedure shortly after the Steelers arrived home from their loss to the Jets. The procedure was performed by Dr. Ivan Tarkin, a trauma surgeon at UPMC Mercy in Pittsburgh, and Rudolph was kept in a trauma unit for three days after having it.

“They were worried it would puncture my aorta,” Rudolph said at the time. “It was very scary.”

The Steelers decision-makers who matter the most, team president Art Rooney II, general manager Kevin Colbert and head coach Mike Tomlin, have all said at some point so far during the offseason that Rudolph is currently the team’s backup behind Roethlisberger and that that isn’t likely to change prior to training camp getting underway.

Here is the play and hit that put Mason Rudolph on IR #Steelers pic.twitter.com/vo27AddoFa