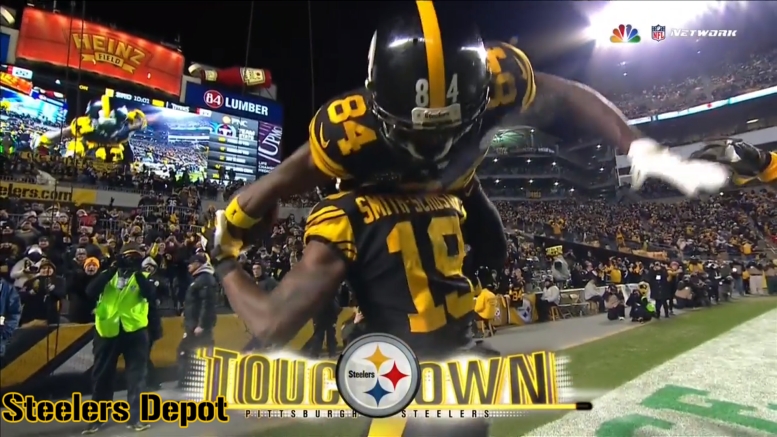 The Pittsburgh Steelers, on so many levels, did not have the sort of season that they anticipated having. Outside of the quarterback position, I think the wide receiver group accounts for that more than anything. No doubt, at this time last year, they were not expecting to be trading Antonio Brown.

JuJu Smith-Schuster was supposed to take over as the clear number one receiver. Ben Roethlisberger’s injury threw a major roadblock on the path to that taking place, but he also dealt with injuries, and yes, also simply performance issues.

The numbers that Brown and Smith-Schuster put up in 2018 elevated them to rare air. Both caught over 100 passes for over 1200 yards. They combined for 22 touchdown receptions, though 15 of them came from Brown, both a career high and a league high.

Brown was an important on-field influence and mentor for Smith-Schuster during the course of his first two seasons in the league, but that behind-the-scenes relationship quickly eroded over the course of the past 13 months, perhaps beginning in earnest when the latter was voted the team’s MVP by the locker room.

He went on to badmouth Smith-Schuster on a number of occasions over social media, both before and after he was traded. Meanwhile, his own life—Brown’s that is—continued, and continues, to deteriorate, culminating in his recently having spent a night in jail as he faces a possible trial for assaulting a moving truck driver.

Said Smith-Schuster of his former teammate and friend, “it’s definitely different. Where you guys are concerned, I’m concerned too. It’s tough for the guy. You take away his job, what he’s been doing since he was a kid. So you take that away and what he’s going through, being a guy on the outside in,  wow, that’s a different dude than playing on the field, how he was”.

The 23-year old has consistently and successfully been able to take the high road when presented with such thorny issues to comment upon in the media. It was perhaps his best trait last season, given his limited amount of success on the field.

Obviously, the Steelers expect Smith-Schuster to rebound in a major way in 2020, with Roethlisberger hopefully at quarterback. As for Brown, while he told the USA Today that he plans to get back into the NFL, he first has now multiple legal hurdles to overcome, and possibly even jail time.