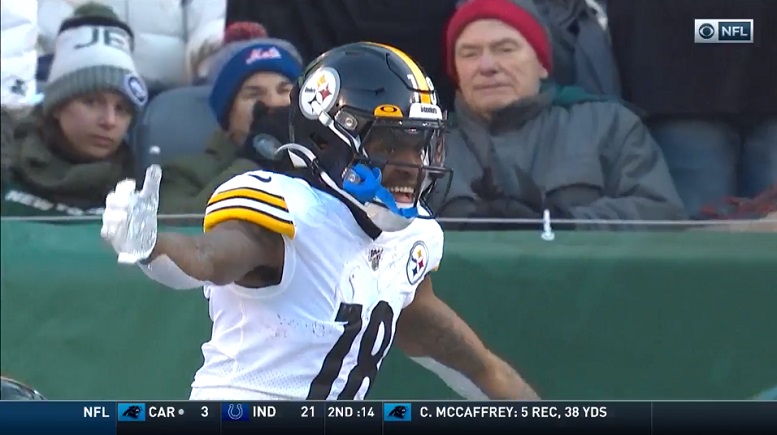 The Pittsburgh Steelers offense was once again putrid as a whole in the team’s Sunday road loss to the New York Jets but at least one young player stood out even in defeat. That young player was none other than rookie wide receiver Diontae Johnson, who registered a season-high eight receptions against the Jets for 81 yards and a touchdown.

Johnson’s Sunday production wasn’t bad at all for a player who had just said last week that he’s tired and that he has hit the proverbial rookie wall with two games remaining in the regular season. Perhaps Johnson drank a lot of water this past week. Whatever he did to ready himself for the Steelers Sunday road game against the Jets, it worked.

Johnson, the Steelers first of two third-round draft picks this year, enters Week 17 as the Steelers leader in receptions with 55 for 626 yards and five touchdowns. With one game remaining, he’s nearly assured to end the regular season as the Steelers reception leader and assuming that happens, it will mark the first time a rookie has accomplished that feat in Pittsburgh since Ron Shanklin and Dave Smith both did it in 1970 with 30 receptions each.

As for how Johnson’s rookie season rates league-wide when compared to other rookies this year, he enters Week 17 in second place in overall receptions behind Washington Redskins wide receiver Terry McLaurin, who has caught 58 passes for 919 yards and seven touchdowns through Week 16. Like Johnson, McLaurin was selected in the third-round of the 2019 NFL Draft. He was selected by the Redskins 10 picks after the Steelers drafted Johnson.

It would be nice to see Johnson close out his 2019 rookie regular season with a bang and in the process, help power the team to a win. If that happens, and the Steelers get some much-needed help from the Houston Texans on Sunday, Johnson will get to play in at least one playoff game as a rookie.