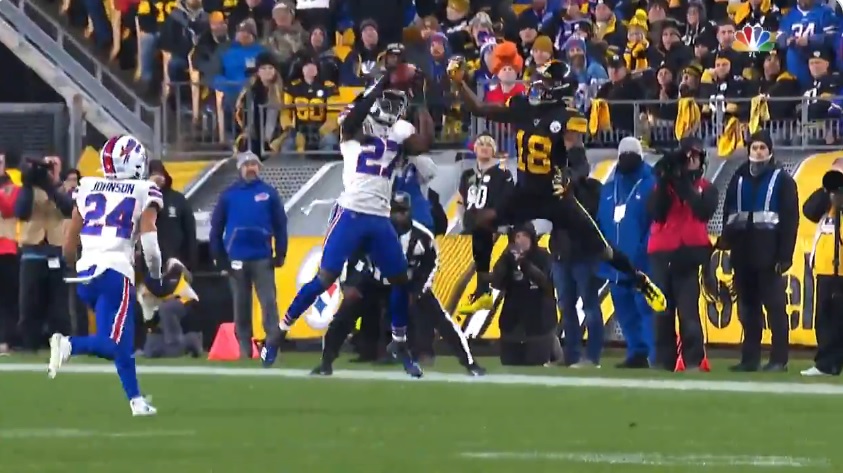 The Pittsburgh Steelers let a very big opportunity to make a statement in the AFC playoff race slip right through their hands as they were unable to overcome a sloppy and mistake prone performance. After turning the ball over five times, the Steelers fell 17-10 to the Buffalo Bills in their home finale.

Devlin Hodges definitely had the worst showing of his brief NFL career on Sunday night as threw four interceptions and finished with a 43.9 passer rating. While the Bills were able to take advantage of the Steelers’ turnovers, the Steelers were not able to do the same and that was one of the main differences in this one.

In what has been a consistent theme this season, the Steelers stumbled right out of the gate, almost daring the Bills to take advantage. On the team’s first drive, Hodges was intercepted by Tre’Davious White who came down with it at the Bills’ 25-yard line. The Bills would not take advantage but they would make sure to capitalize on the ensuing Steelers’ mistake.

Jordan Berry has been having a solid season but his first punt of the game was anything but solid. A 22-yard junior varsity punt to the Steelers’ 40 yard would give Josh Allen a short field to work with. After converting a 4th and 6, Allen would close the nine-play drive by punching it in himself from the one-yard line to give the Bills a 7-0 lead to open the second quarter.

As he has done a lot recently, James Washington was able to provide a big play to spark the offense, catching a 35-yard pass from Hodges to put the Steelers in Buffalo territory but a questionable wildcat call on first down eventually stalled the drive and the team had to rely on a Chris Boswell field goal.

After Steven Nelson intercepted his first pass of the season, the Steelers looked to be right back in it and seemed poised to take momentum going into halftime. Once again, the wildcat would have different plans as a disastrous play that saw Diontae Johnson fumble after a botched snap to James Conner land in the arms of the Bills’ defense. After three huge mistakes, the Bills would head into halftime up 7-3.

While Conner could not score before half time, he made sure to get into the endzone on the Steelers’ first drive after the break. A 17-yard carry to the Bills’ 11-yard line would set up a Hodges to Conner touchdown connection that would give the Steelers their first lead of the night. Conner would finish with 51 yards on 12 touches in his return game.

Mistakes would continue to plague both teams from here as the Bills and Steelers would trade turnovers during the third quarter. First, it was Defensive Player of the Year candidate T.J. Watt punching out the fumble out of Devin Singletary’s grasp in Pittsburgh territory. The Steelers would recover but would be unable to do much with it.

Unlike the Steelers, the Bills were adding points off turnovers and once again it was White intercepting Hodges that was the catalyst. Hodges’ pass intended for Johnson was far too inside and intercepted. If not for an incredible effort by Matt Feiler, White surely walks in for a touchdown but a key tackle at the 18-yard line prevented the score and the Bills would only be able to add a field goal to tie this game at ten.

Even the loud roars of Renegade and the Heinz Field crowd would not be enough to stop Allen and the Bills’ offense. Allen drove down 70-yards down the field in just over two minutes to put the Bills ahead by a touchdown. John Brown started it with a 40-yard catch down the sideline to neutralize the crowd and Tyler Kroft finished it with a 14-yard touchdown catch after Terrell Edmunds failed to pick him up.

The Steelers would have two final chances to win it late but both drives ended in interceptions. The first pass to Deon Cain in the endzone would be picked off but with two timeouts, the Steelers would get one more chance with just over a minute left. That drive ended in similar fashion as a false start penalty and a costly sacked ended with a heave into the end zone that ended up in the arms of Levi Wallace to seal the victory for the Bills.

The Steelers will now travel to New York and say hello to an old friend in Le’Veon Bell as they take on the New York Jets. Kickoff is set for 1:00 p.m. EST.