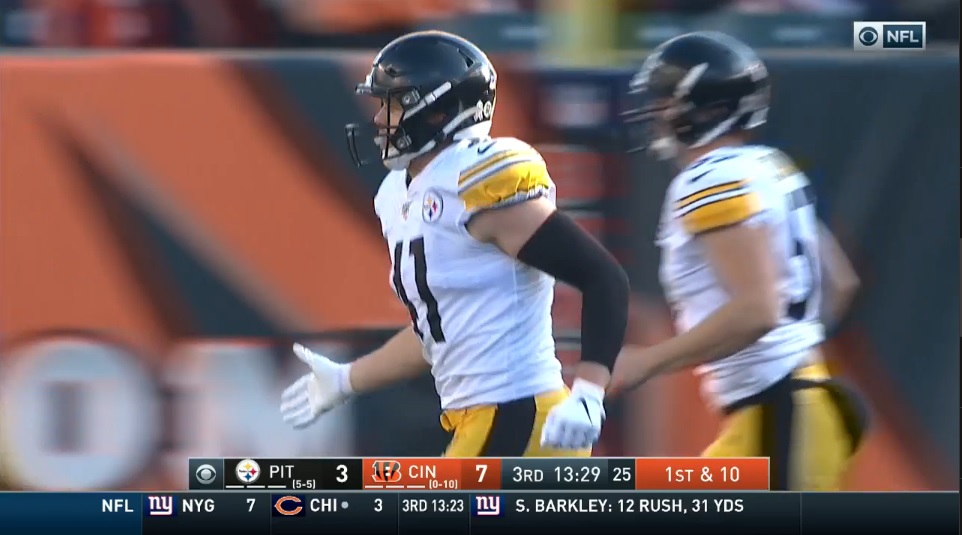 It’s a crucial stretch for the Pittsburgh Steelers. The focus will be on so many key players. Devlin Hodges at quarterback, Benny Snell in the backfield, a defense littered with stars like TJ Watt and Minkah Fitzpatrick.

So of course, I want to talk to you guys about Robert Spillane. Far from a household name but he’s holding down the fort on special teams. Mike Tomlin gave him a shoutout to start his press conference today, mentioning guys like he and Tevin Jones for the job they’ve done since getting lifted off the practice squad.

“We got contributions form a lot of places,” Tomlin said, recapping Sunday’s victory. “This journey that is the season will always present you with adversity. What’s adversity for some is opportunity for others. We talk openly about it. But it goes beyond talking openly about it. We gotta create an environment where guys get an opportunity to prepare for those moments. So it’s really cool to see the end result of that. Some guys been preparing behind the scenes for an extended period of time in some instances and getting the opportunity to stand and deliver for us big in moments…guys like Robert Spillane, who has been a practice squad guy, elevated in recent weeks and has been a consistent contributor on our coverage units.”

Despite playing in just four games this year, Spillane has already recorded seven total special teams tackles. That’s fourth on the team trailing only: Tyler Matakevich (12), Jordan Dangerfield (10), and Johnny Holton (8). He was recalled from the practice squad after Ulysees Gilbert III was placed on IR with a back injury.

This season isn’t Spillane’s first NFL experience, he played 20 special teams snaps last year with the Tennessee Titans, but it’s shaping up to be his largest exposure to the game. And he’s handling it well.

While the Steelers don’t rank highly in their coverage units, they’ve done a nice job in recent weeks. They held the Cincinnati Bengals’ Brandon Wilson, then the league’s statistically most productive kick returner, to just 23.5 yards on four kick returns. That was Spillane’s best performance, finishing with four total tackles. Three on kicks, one on a punt. Four special teams tackles in a game is an insanely high amount and speaks to how well he’s playing.

He bounced off the roster earlier in the year when injuries at other positions struck but his play has been impressive dating back to training camp. Here’s what we wrote in our Latrobe wrap-up.

“Sneaky good camp for him. Average athlete, at best, but takes good angles to the ball and is a physical, impactful tackler. He translated the work he saw in backs on ‘backers to games, killing RBs and picking up a pair of sacks already.”

Those skills are translating. He’s another example of the “next man up” mentality that’s propelled this team onto the right side of the playoff race.