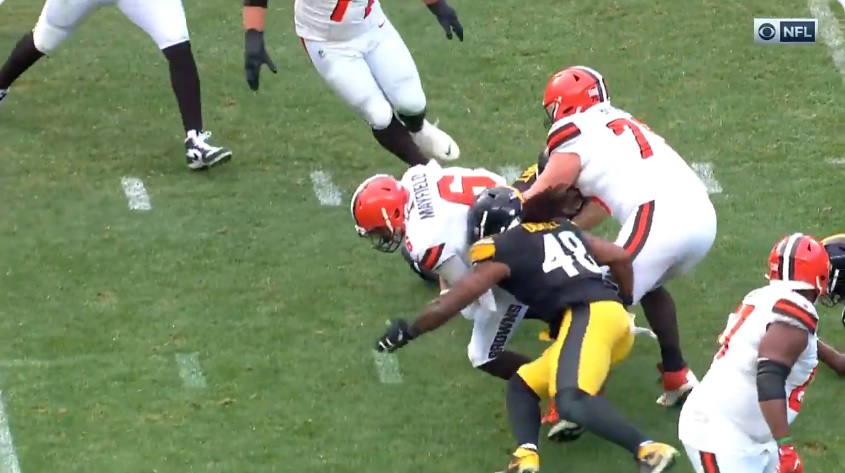 Winners and losers from the Pittsburgh Steelers 20-13 win over the Cleveland Browns Sunday afternoon.

James Washington: Washington has been the best Steelers’ offensive player for the better part of a month. He’s making the plays he was drafted to bring. Taking the top off the defense and winning combated/contested catches. Couple pretty passes from Devlin Hodges but his concentration and hands have been excellent. Nowhere moreso than on his TD.

Jaylen Samuels/Benny Snell: Both guys ran well today. Samuels has looked as good in any game since Week 15 against New England last year, his coming out party. Snell continued to run tough, show excellent ball security, and was rewarded with his first ever touchdown.

Devlin Hodges: Can’t talk about this list without talking about Duck. Once they let him throw it, he settled in and showed his ability to air it out with strength and placement. Aside from a 3rd and goal snafu, took good care of the ball too. I don’t put the INT on him.

Kam Kelly: Shoutout to Kelly, who I’ve been pretty critical of this year. Whole coverage unit did well but looked like he was involved in two tackles. Kudos for stepping up and forcing the Browns to drive long fields.

Joe Haden: For the game-winning INT. A tough one, too, reaching back for the ball. He dropped two last week. Not this time.

Diontae Johnson: Really tough game for Johnson, perhaps the worst he’s had this season. A drop (though it may have been tipped) a personal foul, and he never saw the ball on Hodges’ interception in the fourth quarter. Punt return carriage was better but that’s low on the list of things to talk about regarding his play Sunday.

He did end things with a crucial third down conversion but in the same breath, ran out of bounds and stopped the clock. Better days ahead for the rook.

Randy Fichtner: It basically took free plays and a two minute drill for Hodges to prove to Fichtner to throw the football and show some trust in Duck. Lot of 2nd down runs that set up “3rd and punt.” The playcall on 3rd and goal, a designed run for Hodges to run left, was less than stellar. It just seems like he lacks “go-to” calls in crucial moments. It’s tough with the rotating door at QBs but that’s his job.

Pre-snap penalties: Far too many of them that backed the offense up time and time again. Really screwed with the rhythm and playcalling of drives. Offsides, illegal formations, etc. Just sloppy play you can’t afford this time of year. Finished the game with six or seven which is just an insanely high amount.