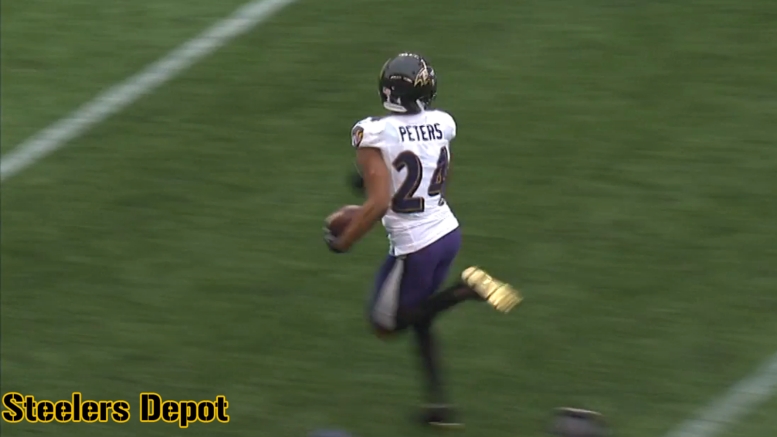 Back in October, the Baltimore Ravens sent a fifth-round pick, plus second year linebacker Kenny Young, to the Los Angels Rams. In return, they received Marcus Peters, a Pro Bowl former first-round cornerback, who has recorded more interceptions than anybody else since entering the league.

Bringing in Peters gave the Ravens tremendous depth at cornerback, to the point where they have been using Marlon Humphrey in the slot, with Jimmy Smith opposite Peters, and Brandon Carr has even been taking reps at safety (where they were admittedly dealt a blow with the season-ending injury to Tony Jefferson).

Baltimore and Pittsburgh have very different philosophies when it comes to negotiating with players in-season, and this year has been a banner year in illustrating those differences. Ahead of the season finale, the Ravens just worked out a contract extension with Peters.

One of the reasons the Ravens were able to get Peters for the price that they did is the fact that he was in the final year of his contract. They may have only had him for 10 games, plus a postseason run. Even if that only netted them a Super Bowl and then he left in free agency, that would more than justify the cost (not to mention the eventual compensatory pick).

But instead, they decided that they want Peters around long-term. They completed a three-year extension for the fifth-year veteran, worth $42 million, or $14 million per season on average. It reportedly consists of $32 million in guaranteed money, with $20.5 million being paid in the first year of the contract.

This move likely means that they won’t be keeping Smith around, who is in the final year of his contract in 2019. He was already talked about as a potential salary cap casualty in the offseason. He played under a base salary of $9.5 million this year with a total cap hit of nearly $16 million.

Locking up Peters for three more years is bad news for the Pittsburgh Steelers, but the good news is that I wouldn’t expect him to play today. He is nursing a minor chest injury suffered last week, and I don’t see any good reason why the Ravens would want to play him in a game that couldn’t possibly mean any less in the circumstances.